10 Japanese Foods That You Can’t Miss! 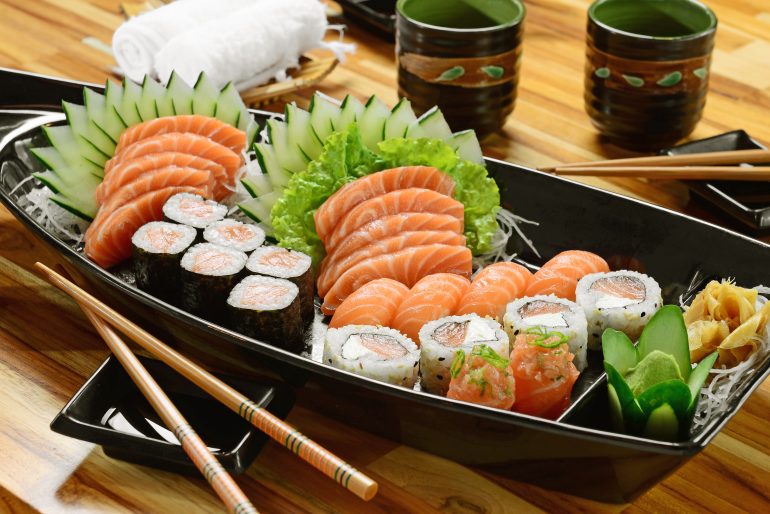 Move over Sushi and Ramen. We have compiled a list of the ten most offbeat and delicious Japanese foods that you have to try at least once in our life. They DO NOT include sushi and ramen. If you’re the kind of person that revolves a trip around the kind of food available at the place, Japan should be your stop! We’re giving you 10 reasons why.

Yummy-Yummy! Beef may be banned in Maharashtra but Japan practically lives off beef (and other crazy meats). Shabu-Shabu consists of a hot broth served with thin slices of beef or pork. There’s just one thing – both the broth and the beef/pork are served separately. You’ve got to use those chopsticks, pick up the meat, dip it in the boiling broth and eat it! A tasty-tasty dish indeed! Every time I talk about Okonomiyaki, I have the crazy urge to say onomatopoeia. Phew! Now that I’ve gotten that out of my system, it’s time to talk about food that you can put into your system. For a first-timer, you’ll never really know what Okonomiyaki is. It looks like a cross between a pancake and a pizza and it tastes just as delicious. It consists of cabbage and batter. You can have a vegetarian version of this and top it off with cheese or wasabi or go the good ol’ Japanese way and eat it with sliced meat or seafood. A lot of restaurants just provide you with a base and let you build your own Okonomiyaki. Sort of like Subway, just with beef and pork and wasabi! Another do-it-yourself kind’ve dish and much like our local Barbecue Nation, Yakinuku invites diners to cook their veggies or slices of meat on a griddle or plate. Offal and beef are the more popular meats chosen. However, there’s pork, chicken and seafood also available. Ermmm! You cannot go to Japan and not try horse meat. You get it in soup or stew or just cooked in a variety of preps. There’s even raw horse meat which unlike the other sushi is slightly tougher to chew. The Japanese absolutely love it. I mean, guys it’s an ice-cream flavor!!! Japan can go crazy with the kind of flavours it serves but horse-meat ice-cream? Think you’re willing to try it out? This one is only available at Furano’s Farm Tomita. In the month of July, the lavender fields come alive and make for a spectacular sighting. The lavender soft-serve ice cream is truly worth a trip to Hokkaido (as if the lavender fields were not enough). Straight out of the set of a movie, this place could assure you loads of Insta pictures! Add to that the fact that this ice-cream flavor if hardly available nywhere else in the world! Now you know you have to try it. Potato chips are passe! Eating baby crabs – that’s the in thing – at least in Japan. A favourite among the locals, this snack is a crunchy hermit crab coated with a sweet sauce and sesame seeds. What Lays is to Indians, Tamagogani is to the Japanese. Munch and crunch guys! Has anyone told you that you eat like a sumo wrestler? It’s time to put yourself to the ultimate test with Chankonabe – the food for sumo wrestlers. What is it? A giant buttery miso soup that comes with meat and vegetables. The serving is literally bigger than the size of your face. No kidding! Burrrp Not for the weak-hearted. It’s not about eating Fugu, it’s more about daring to eat Fugu. Fugu or Pufferfish is not just curious to look at, it can actually be fatal if not prepared properly. Not fatal like having boils fatal. By fatal, we mean deathly fatal. In fact, a chef has to undergo three years of training to be able to cook Fugu. On the bright side (if you survive), you get to proclaim to the world that you ate Fugu and survived it! How often does one get to boast about that? Takoyaki is like the chaat of India. No, really! Takoyaki is a street-side snack and you’ll often find the Japanese queuing up for it.  Osaka is especially famous for it. Takoyaki comes with a centre of prawn, octopus or ham and cheese (no horse meat, thank God)! Calm yourselves Indians! This one isn’t made with curry leaves and onions and everything good! Japanese curry is just as tasty if not as spicy as its Indian counterpart. The curry is primarily made of flour, oil and spices and is slightly sweet. Pre-dominant in Tokyo, it is normally accompanied with rice, nan bread, or udon noodles. The curry is normally served with beef or a tonkatsu pork cutlet.