5 Amazing Facts About Biryani We Bet You Didn’t Know 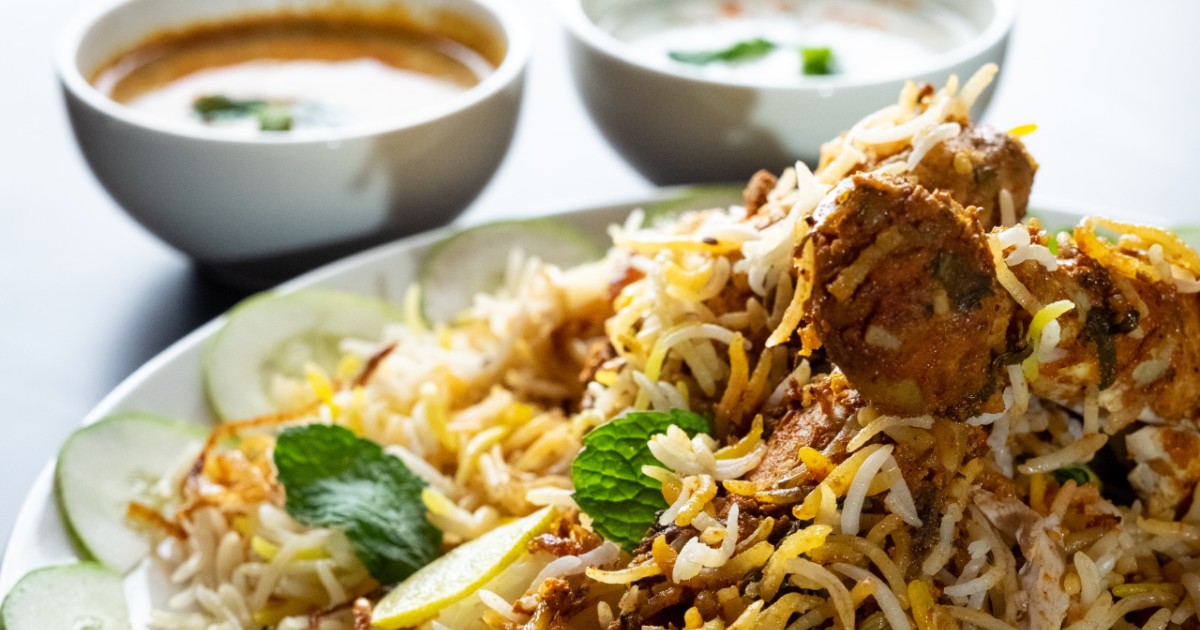 Biryani is one of the most loved dishes in India. Every state here has created its own version; right from Hyderabadi, Lucknowi, Kolkata, Dindigul, Sindhi and many more. The fondness for this dish is truly unmatchable. Biryani is made up of – freshly cooked aromatic rice, marinated with a combination of spices and the meat of your choice (Chicken, Mutton, Fish or Egg). We all can agree that there is no love greater than the LOVE FOR BIRYANI! Curly Tales is taking you on the food tour of Biryani and giving you all the information that you need to know about your favorite dish Biryani. Every state, culture, subculture, region have created their own versions of Biryani and they seem to protect or fight for their version as the best version of Biryani ever witnessed. The word ‘biryani’ is derived from a Persian word, birian, which means fried before cooking. There are various theories about Biryani and its origin and its history in India. It is believed in 1398, the conqueror of Turk Mongol, Timur brought Biryani to India. Biryani was a part of his daily diet. Then there is another theory which states that Biryani was first brought to Southern Malabar Coast of India by Arab Traders. It is also said that Biryani is very similar to the dish mentioned in Tamil Literature, which goes by the name of Oon Soru.

The most popular story which we kind of believe in, is the one with Mumtaaz Begum. Mumtaz Begum was the inspiration for many women of her time. When Begum visited army camp and saw that the soldiers lacking nutrition as a part of their daily diet, she instructed the cooks to prepare lavish meal, a meal full of nutrition for the battalion. No wonder, Shahajan built a beautiful Taj Mahal palace after her, as a symbol of his love towards Mumtaz Begum.

We also took an expert opinion from Food Educator and Chef Suvir Saran and as per him the Biryani prepared in Hyderabad, Kerala, Karnataka and Tamil Nadu offer a variety of aroma and texture and taste in its Biryani. The heft and depth of spices used to cook Biryani in the Southern part of India are truly unmatched. The Biryani made in this part of India is more robust and it comes with a sense of belongingness and hence he believes that the origin of Biryani lies in the Southern part of India.

Amongst all the Biryani’s, Hyderabadi and Lucknowi or Awadhi Biryani are the most popular ones. India’s love for Biryani makes it the most searched dish of 2019. Not just any Biryani, specifically Chicken Biryani has turned out to be the most searched Indian food globally in 2019. A study by SEMrush found that chicken biryani had an average of 4.56 lakh searches each month. As per the study, Butter Chicken was second on the list, followed by Samosa, Chicken Tikka Masala, Dosa, Tandoori Chicken, Palak Paneer, Naan, Dal Makhani, and chaat. Butter Chicken, which every person in Northern India swears by, was searched at an average almost four lakh times, while one of the most common and popular snacks, Samosa was searched an average of 3.9 lakh times. Chicken Tikka Masala was searched an average of 2.5 lakh times, the study showed.

Chef Suvir Saran adds, “Biryani is the mirror image of our population and as the clock is ticking, its a test of time. Biryani has survived longer than any Human being, it will live forever because of its history, taste and texture.”

Biryani is cooked with the various method, out of which the most popular one is Dum Phukt i.e. a process of cooking on the slow fire. Dum pukht cooking uses a round, heavy-bottomed pot, preferably a handi (clay pot), in which food is sealed and cooked over a slow fire. This is the most popular and traditional method of cooking Biryani but over a period of time, there are many modern techniques developed such as Steamed biryani, Charcoal biryani and Jhatka Biryani. There are also 2 types of Biryani which also throws light on the version of its cooking style is Kacchi Biryani and Pakki Biryani.

In the Kacchi tyle of Biryani which is also known as kacchi yeqni, refers to the method of cooking all the raw elements together in one pot. This cooking style results in a flavourful and happy marriage of all the ingredients of the biryani recipe. On the other hand, Pakki biryani is considered the “easy way out” of cooking the biryani recipe. In this style of cooking biryani, the rice and meat are cooked separately before being brought together right before serving. There is also a variation in the type of rice that the Biryani is cooked with, as per region. In the North of India, Biryani is cooked with Basmati rice whereas, in the south, it is cooked with the local rice like Samba, Kaima and Kala Bhaat.

There are different versions of Biryani to be found in India and across the world but the 8 types of Biryani have made their mark – Dindigul, Ambur, Thallserey, Malabar, Memoni, Hyderabadi, Kolkata and Lucknow/ Awadhi Biryani.

Initially, Biryani was only cooked with one meat that was Mutton but over a period of years, it is now cooked with Chicken, Fish, Egg and Vegetables. There is a never-ending debate that has taken place that Biryani cooked with Vegetables is not Biryani, its Pulav. Now that debate continues and there is no proven fact to it but if we go by one of the theories behind the origin of Biryani, it states that Biryani was prepared in India before the first Mughal emperor Babur conquered India. The 16th-century Mughal Ain-i-Akbari makes no distinction between biryanis and pilaf (or pulao). It states that the word “biryani” is of older usage in India. I guess it’s high time that all the non-vegetarians make their peace with the fact that Biryani cooked with vegetable can also be called as Biryani, oops Veg Biryani.

Chef Suvir gives his 2 cents on the essence of Biryani originating from each region, he says, “In Calcutta, Biryani is very different, they have eggs. In Lucknow, it’s all about the taste of the yeqni. In Delhi and Punjab, it’s about that tomato gravy. In Hyderabad, they make Hari Kacchi Biryani, which is so incredible.”

Also read: 10 Different Types Of Biryani From Across India You Have To Try

Ingredients vary according to the region and the type of meat or vegetables used. Meat (of either chicken, goat, beef, lamb, prawn or fish) is the prime ingredient with rice. As is common in dishes of the Indian subcontinent, vegetables are also used when preparing biryani, which is known as vegetable biriyani. Corn may be used depending on the season and availability. The spices and condiments used in biryani may include ghee (clarified butter), nutmeg, mace, pepper, cloves, cardamom, cinnamon, bay leaves, coriander, mint leaves, ginger, onions, tomatoes, green chillies and garlic. The premium varieties include saffron. In all biryanis, the main ingredient that accompanies the spices is the chicken or goat meat; special varieties might use beef or seafood instead. The dish may be served with chutney or raita, korma, curry, a sour dish of aubergine (brinjal), boiled egg, and salad.

Biryani comes with huge history and various versions of it, various methods of cooking it. There is a pride and sense of belongingness from each region for their version of Biryani. Biryani is the most celebrated dish in India and is a must-have item on the menu for any occasion or celebrations in India. We don’t know if it originated in India or not but one thing we can say with utmost pride that nobody loves biryani as much as we Indians do.