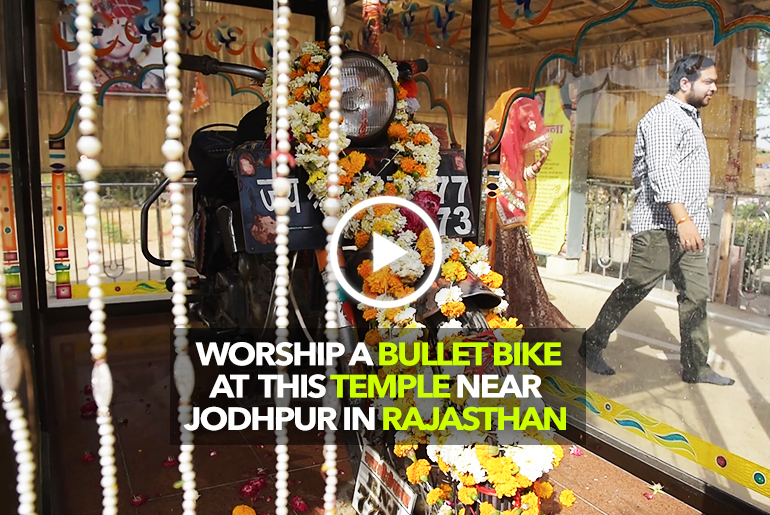 Rajasthan is a land of all things awesome and the Bullet Baba Temple with a Royal Enfield bike to worship just proves it.

A small village close to Jodhpur is where the wonderful Bullet Baba Temple lies. The Chotila village was just an ordinary village, before a shocking incident happened there. In 1991, Om Singh Rathore or Om Banna who was a village leader’s son was riding on his Royal Enfield Bullet bike when he met with an accident. He lost control of his bike and crashed against a tree.

Om Banna lost his life that day and the motorcycle was seized by the local police soon after. But the next morning, the bike was back to the accident spot. The police and villagers found this strange but decided to take in the bike once again.

The bike was chained and the fuel was drained from it. Despite that, it was found on the accident spot the next morning. That’s when the locals decided to keep it there and built a temple around it with the motorcycle being the deity they worshiped.

Also read: Bhangarh Fort In Rajasthan Is Infamous For Being The Most Haunted Place In India Even after years, the locals still believes that Om Banna’s spirit lives inside that motorcycle. He also helps distressed travelers going through that route.

The temple has turned into a place where many travelers stop by, and bow their heads down to the motorcycle and continue with their journey ahead. By Road: It is located nearly 22 km from Pali and you can take the NH65 between Pali and Jodhpur.

By Train: The nearest railway station is Pali (20 km) and you can get there via Delhi, Agra, Jaipur etc.

By Plane: The Jodhpur airport (51 km) is the closest airport to Pali district.

Also read: Lakshman Sagar In Rajasthan Has A Private Pool In Every Cottage & Is Every Traveler’s Dream