Curly Tales Presents The Biggest…
How Noida Rebranded Itself Into…
This Nature-Themed Cafe In Guwahati…
KFC Japan Buffet With Pizza,… 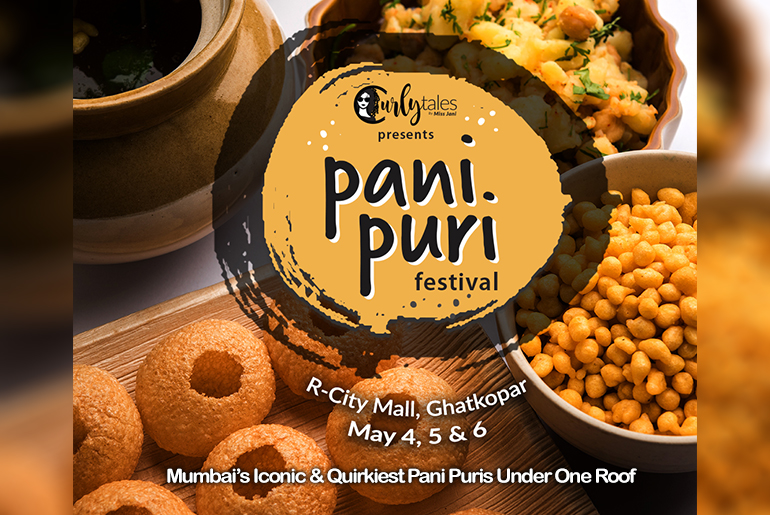 Hear ye, hear ye! Good people of Mumbai, there’s a Pani Puri Festival happening in Ghatkopar and we’ve got all the details (coz we’re organising it!)

People say having someone to love you brings spice, flavour, happiness & meaning to life! Those people have never eaten Pani Puri because we believe that Pani Puri does a better job, at a cheaper cost. In ode to the amazing Pani Puri, we at Curly Tales have organised a Pani Puri Festival at R City Mall Ghatkopar on 4th, 5th & 6th May. Walk in anytime between 5pm – 10pm & indulge in the best pani puris the city has to offer. Expect a plate full and a mouth full of bliss. At Curly Tales we don’t do things the ordinary way so prepare to be mind blown with the most amazing & quirky pani puris that Mumbai has to offer. There’s Chocolate Pani Puri with Paan Shots, Mango Pani Puri, Mushroom Pani Puri, Cheese Pani Puri and loads more. There’s even a Pav Bhaji Pani Puri. Talk about things getting crazy! For those who don’t like to experiment, fear not! We’ve got some regular and iconic pani puri bhaiyas as well straight from Mumbai’s iconic Khau Gallis. So get ready to say, “Bhaiya aur teekha bana lo.”

A Pani Puri Eating Competition! That’s what else. Think you’re the ultimate pani puri eater? Then it’s time to claim your victory after a worthy competition with a worth competitor. The victor leaves with a special prize & a belly full of pani puri.

You’ll also get the chance to meet & greet the Curly Tales Team. We’re all going to be there so come say Hi and share a plate of Pani Puri with us. Maybe we may even challenge you to a Pani Puri eating competition! If after reading all this, you think that Muh Main Paani (Puri) Aa Gaya, then make note of the deets