Drone Taxis To Fly in Dubai And We Can’t Wait To Try! 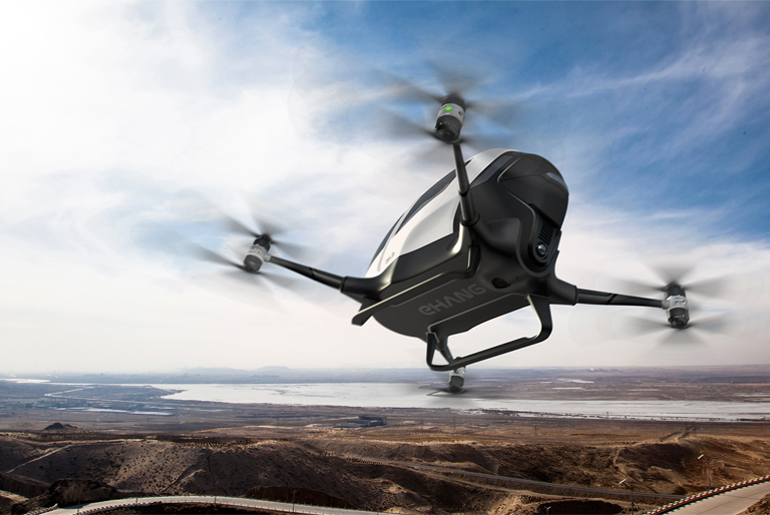 Drone Taxis make their way to Dubai. Named as EHang-184, the taxis will be launched in July this year. You can now fly over the city of gold.

This summer, fly over Dubai when the self-flying drone taxis are there to pick you. It’s an egg-shaped craft with four legs sticking out with two small propellers. The country plans to develop passenger-carrying drones as a way to move people around the UAE’s biggest city. How does it work?

The passenger has to select the destination on a touch screen. That’s it! And be ready to fly. The test flights have already begun and we just can’t wait to take a ride.

It is an ‘auto-pilot’ vehicle by a command centre. Drone taxis can carry one passenger weighing up to 220 pounds (approx 99kg) It can fly for 30 minutes on 2 hours of charging at a height of 1,000 feet. It can fly as far as 100km per hour. EHang-184 is equipped with secure computer networks so it can’t be hacked! This quadcopter is powered by eight propellers. EHang-184 is made in China and has raised $53 million to date. If there is any technical issue with the drone, it will automatically land at the nearest and safe destination. As per the Times’ news, Dubai has also signed a deal with Los Angeles-based Hyperloop One to study the potential for a hyperloop between Dubai and Abu Dhabi, the UAE capital. Now, what is hyperloop you must be thinking? A hyperloop is a tube that would carry vehicle pods at speeds faster than airliners. It’s just wow! These developments are definitely going to increase tourism in Dubai as people will be curious to check these out. Do you think a flying drone taxi be brought it to India as well? Share your views in comments.