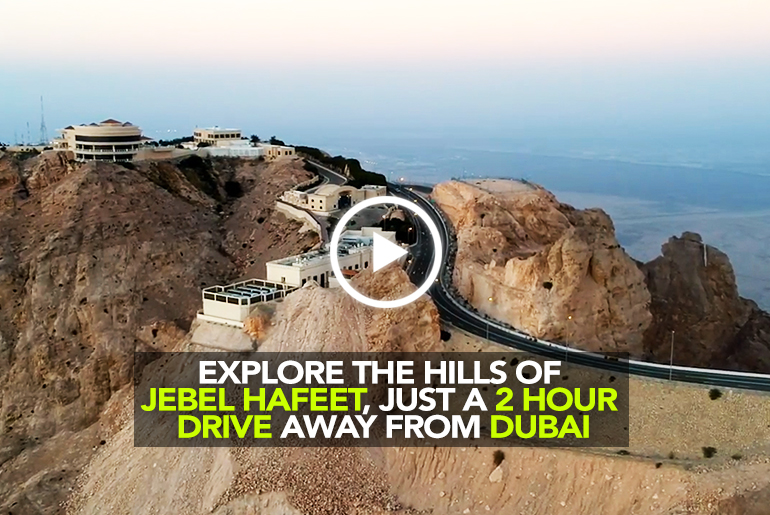 Escape the city hustle & go on a road trip 1,240 meters above sea level to Jebel Hafeet which is the highest peak in the emirate and UAE’s second highest.

This towering mountain terrain stands guard over Al Ain and borders Oman. Once you reach the top, you’ll be rewarded with magnificent views over Al Ain, where you can take breaks to get out of your ride and soak in the calm breeze while enjoying a spectacular backdrop and a picturesque sunset. Jebel Hafeet has been voted the greatest driving road on the planet by various international magazines and websites, such as Edmunds.com. If you are blessed with a great stamina then consider cycling along with many other cyclists who go there to train. There are 21 turns & bends, so you can enjoyably explore your vehicle’s dynamic abilities. Significant fossil discoveries have been made in the area & over 500 ancient burial tombs dating back 5,000 years have been found in the Jebel Hafeet foothills. It could get cooler at the top, so it might be a good idea to take your jacket along. Jebel Hafeet also offers stunning visuals at night, from the city.

What Else To Do While You’re There

At the base of Jebel Hafeet, is the Green Mubazzarah, a genuine oasis with hot springs, lake, swimming pools and chalets. Worth a visit and a dip! Go back in time at the Al Ain Palace Museum, based in the palace of the founding president of the UAE. The museum gives an insight into the life that was once lived there by Sheikh Zayed and his family. You can also find a wide selection of hotels in the area, including Hili Rayhaan by Rotana, Hilton Al Ain and Mercure Grand which is well known for their views and recreational facilities. The hotels range in tariffs and services, so you should be able to find something to suit your taste and budget.