Get Your Ultimate Dinning Experience…
After Kulhad Pizza, Kulhad Dosa…
This Hidden Gem In Chandni…
Not Europe, The Dreamy Location… 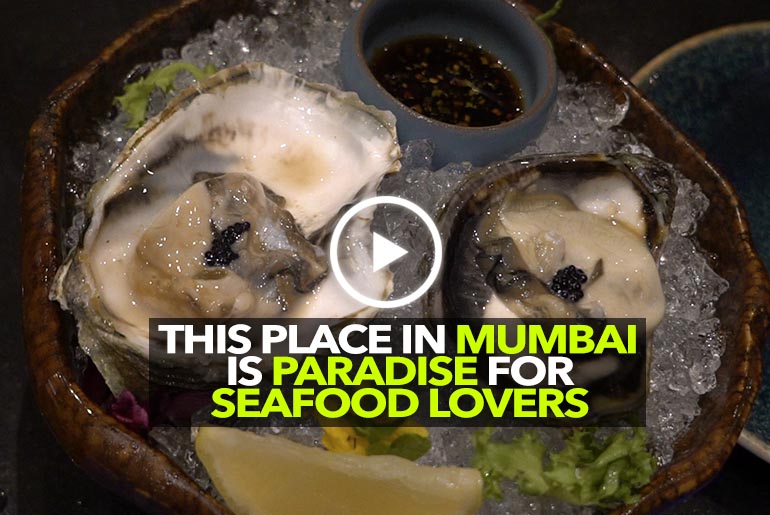 Bringing to you seafood from Japan, Australia, Norway & Alaska, Rivers To Oceans (R2O) in Lower Parel, Mumbai is like a Mecca for seafood lovers.

Rivers To Oceans (R2O) in Mumbai’s Lower Parel is a paradise for all seafood lovers. Heroing the ingredients, R2O gets its produce flown from global legends in seafood- Australia, Norway, Japan & Alaska. They also source some of the best seafood produce from India’s coastline. The restaurant chefs have curated a special menu at R2O, focusing on the concept of “Ingredient is King”, which ultimately reflects on each plate of food that hits the table.

Also read: Get Your Fix Of Barbecues, Seafood And Cocktails With House Of Lloyd In Mumbai The highlight of the ambience is the ‘live kitchen’, with a well-lit ice bed which displays an array of exotic bounties from the sea/rivers for guests to select from. An aquatic-themed restaurant, the interiors highlight hues like blue, white and sea green. The major attraction of the restaurant, the round bar counter has a white marble top with a lit-up wall behind it and a well-lit bottle column above it, suspended from the ceiling. The subtle yet intrinsic white marble table and wooden furniture compliments the ripple effect created across the restaurant.

The highlight of the menu has to be the 15 course veg & non-veg menu. The first course features the rock oysters and caviar. In the following courses, you’ll find crystallized tuna pearls, nicoise salad, scampi tartare and fried rolls of crab that can be paired best with champagne. If you’re a fan of champagne, R2O has a collection of 30 champagnes (20 are served by the glass), the biggest collection of champagnes in town, flown from across the globe. Pair your champagne with tuna simmered with olive oil and some cream cheese crackers to get started. They also serve sushi tacos stuffed with avocado and cream cheese, lobster rolls inspired from England, quesadillas with jalepenos and Malabar curry with pillowy parottas.

If you’re wondering that this restaurant is only for seafood lovers, sorry, but you’re mistaken, as they serve an array of delicious vegetarian dishes too. You can gorge on dishes like Mushroom & Truffle Pate, Home made Corzetti with Wild Mushroom & Stuffed Morels, Asparagus Aranccini & Zucchini & Tofu poke to name a few.

Also read: Highway Gomantak In Bandra Is Your Go-To Place For Lip-Smacking Seafood