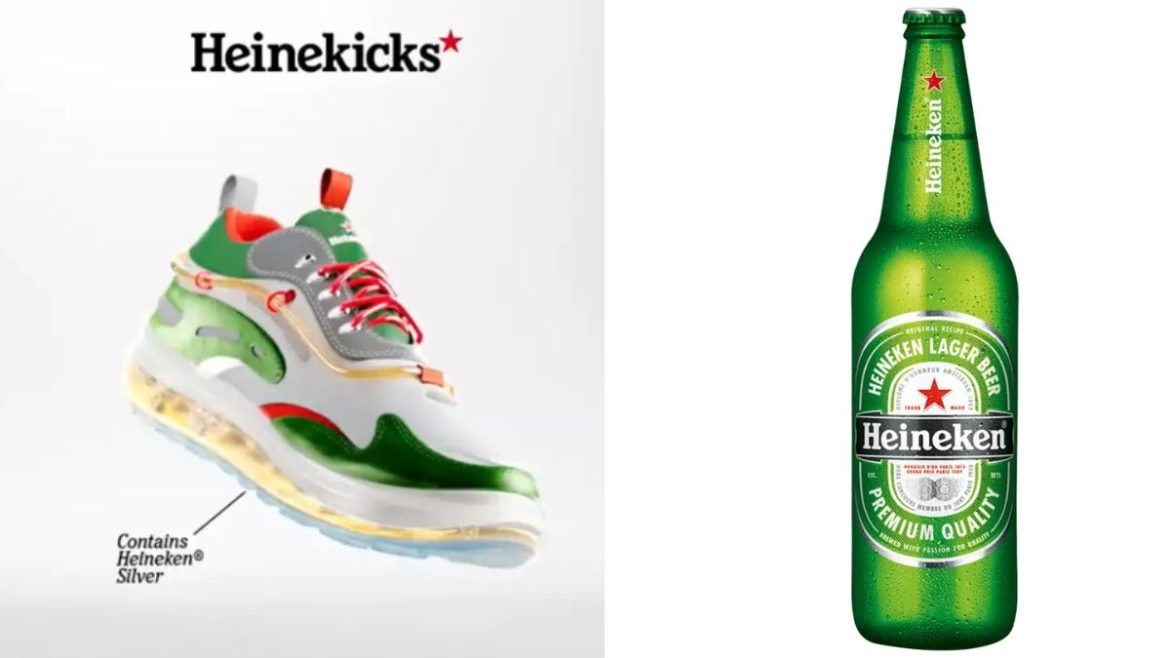 Heineken has released a pair of shoes called ‘Heinekicks,’ which give you the sensation of walking on beer. This beer company has released sneakers with beer-filled soles. The beer company teamed with ‘The Shoe Surgeon’, also known as Dominic Ciambrone. He is a prominent sneaker designer for quirky shoes.  The shoe matches the colour scheme of the Heineken bottle, which are shades of green, silver, and red.

Heinekicks: A Design from the Future?

A removable metal bottle opener is built into the tongue of the Heineken sneakers. It’s a beer for your sole. To celebrate the smoothness of Heineken Silver, this shoe was created in collaboration with noted shoe designer Dominic Ciambrone. Heinekicks aren’t your typical shoe, but you don’t get to walk on beer every day. The company announced on Twitter. The company used a specialised surgical injection method to inject beer into the soles of the shoes, aiming to create a smooth sensation that supposedly mirrors the beer’s flavour profile. The strange pair of shoes sparked a debate on various social media sites, with some fans of the new shoes becoming instant fans while others couldn’t wrap their heads around it.

What are your thoughts on this crazy ‘beer’ sneakers innovation?

Beer for your sole

Designed in collaboration with noted shoe designer, Dominic Ciambrone, to celebrate the smoothness of Heineken®️ Silver. Heinekicks aren’t your everyday shoe, but it’s not every day you get to walk on beer. pic.twitter.com/LefwD5X7if

Balenciaga took the distressed sneakers game to a new level earlier this month when it released the ‘fully destroyed’ collection. Balenciaga’s unusual footwear, dubbed the Paris Sneaker, is available in two styles: high top and mule. The sneakers cost $625 (Rs 48,000) and $495 (Rs 38,000), respectively. They’re made of destroyed cotton and rubber, with frayed edges on the collar, tongue, and lacing system. These specific pairs were concocted for the sneaker’s ad campaign and came up with extremely worn, marked up, and dirtied.

Balenciaga publicised the collection with a note explaining the sneakers’ inspiration. According to the brand, the sneakers are “a retooled classic design in black, white, or red that interprets mid-century athleticism and timeless casual wear, with a white rubber sole and toe. It’s finished with distressed canvas and rough edges for a worn-in look.”

Also read: 5 Luxury Experiences You Must Have With Your Girl Gang In Dubai