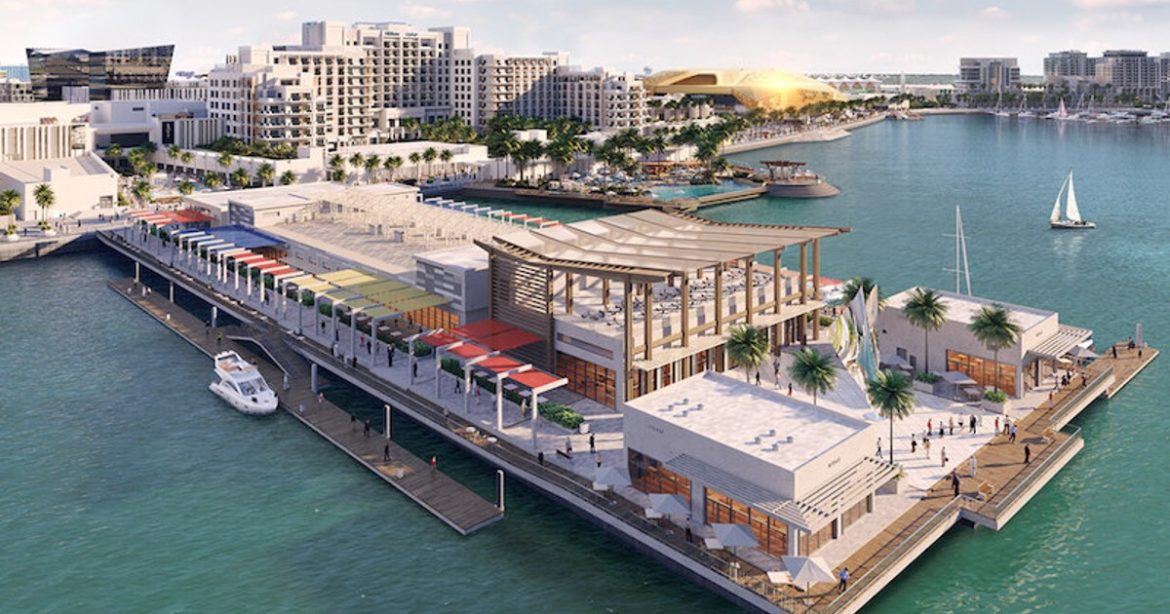 Yas Bay, located on the outskirts of Yas Island and facing the multi-billion dollar recreation and entertainment zone, is on the verge of opening. This Yas Bay is on its way to becoming Abu Dhabi’s most popular waterfront destination, where amazing experiences will be created. More than 30 restaurants and pubs are located along the water’s edge. It also has its own private wharf for relaxing. Allow us to show you around Yas Bay’s most popular sites.

Pier 71 on Yas Bay’s waterfront location will be home to one of Dubai’s most popular traditional noodles joints. Hio, miso, and soy broth rocking feats of noodle grandeur are well-known. This authentic Japanese ramen-ya will be a welcome addition to the Asian cuisine scene in the capital. Whooo! Since it initially opened its doors in 2018, this walk-in ramen bar in the heart of Jumeirah Lake Towers has proven to be extremely popular among Dubai’s foodies.

The cafe is simple on the inside, with plain concrete walls and a scattering of wooden tables. Even the menu is clear and simple. There are only a few primary ramen variations to pick from, but they’re all hearty, nutritious, and full of fresh ingredients. There are also a number of appetisers designed to be shared with friends, like as gyoza dumplings and chicken katsu. 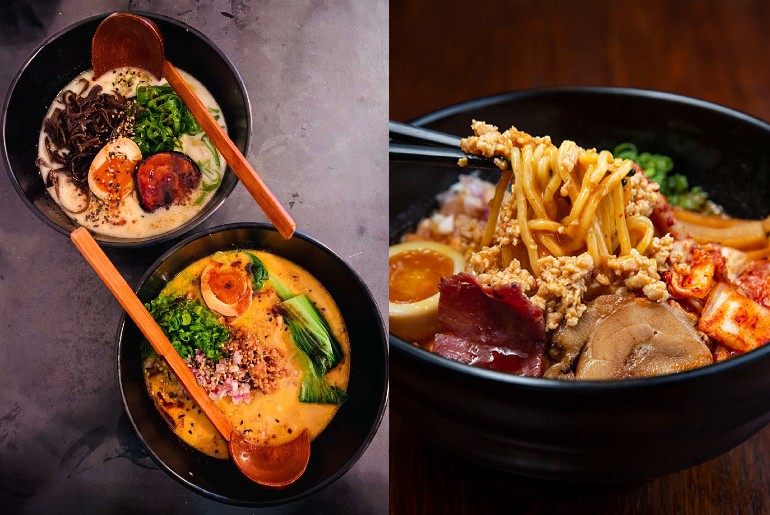 This Mexican restaurant was founded and grown in Toronto’s burgeoning culinary scene. This Abu Dhabi outpost builds on the success of the InterContinental Dubai Marina’s Dubai site. The venture’s creators have claimed that the capital’s version will be more refined. The decor, menu, and soundtrack have a more adult feel to them. This location will also have a raw bar, which we hope will specialise in ceviche. A rooftop patio with views of the Yas Bay Waterfront. 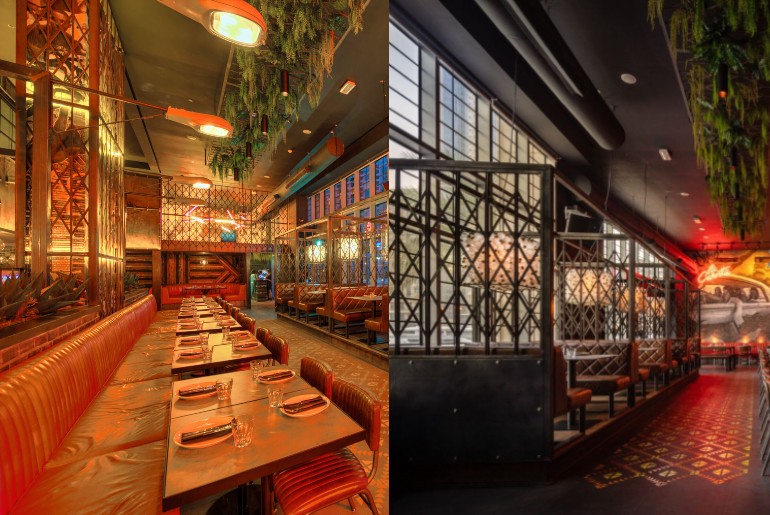 The lively Japanese restaurant and pizza in Dubai Design District (D3) has already found its way to the new multi-billion-dollar Yas Bay development. We think Akiba Dori fits right in with the neighbourhood, with its neon stripes, elegant interiors, and imaginative artwork. Around the middle of September 2021, the latest station of the devastatingly cool Tokyoite eatery Akiba Dori opened. The restaurant is located on Pier 71 in Yas Bay and has a terrace with spectacular skyline views. The Dubai collection is expected to include some mouth-watering favourites. This is not only a Japanese-themed restaurant but also a well-regarded pizzeria. Their freshly cooked Neapolitan pizza is something to look forward to. In this trendy alleyway backstreet of Tokyo, Akiba Dori, savour the best Japanese cuisine as well as one of the top pizza hotspots. Is there anything else you need to know about why Akiba Dori is one of the greatest Japanese restaurants in Abu Dhabi and Dubai? 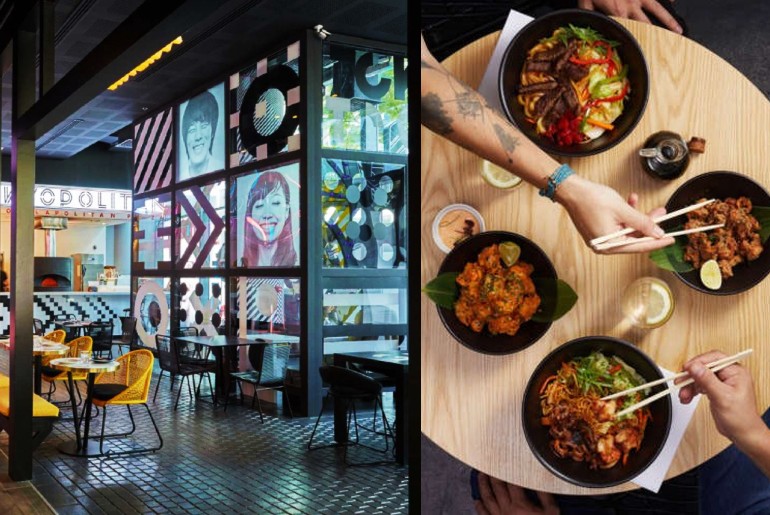 In Abu Dhabi’s Yas Bay, the Lighthouse Restaurant & Concept Store is a must-see. It seats 145 people and is licenced, which is great. The Lighthouse isn’t like any other restaurant you’ve ever seen. Hashem Montasser and Hany Bassiouny founded the brand in 2017 and it combines a gourmet eating experience with a boutiquey shop location. They have a fantastic collection of books, perfumes, and oddities. This is ideal for those people that are difficult to purchase. The cuisine has a bit of a freethinker feel to it. And we mean that in the nicest possible way. This ensures delicious breakfasts and high-quality coffee. Food inventions with a twist. A big component of the menu’s identity is health and nutrition. 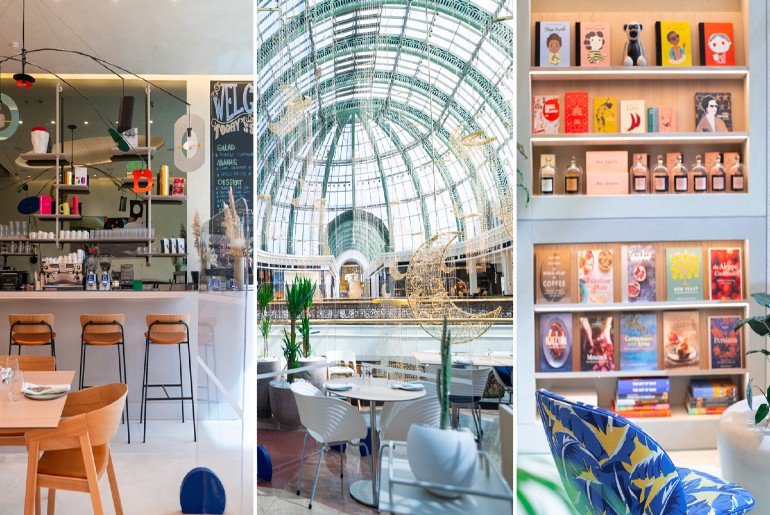 Hunter & Barrel, an Australian steakhouse, will open in the capital’s new leisure and entertainment zone, providing a much-needed gathering spot. It has established a Vida Emirates Hills store in Dubai. With a large oak table, the bar area is sleek and contemporary. At Hunter & Barrel, the food is substantial and fairly priced. Steaks start at Dhs120 for a fillet steak and go up from there. Dhs 150 for Hunter’s sharing platter. Sticky, smoky chicken wings, lightly battered prawns, spicy calamari, and the three-cheese dip are all on the menu. Hot and gooey, with a side of freshly made pita bread for dipping. Mammamia! 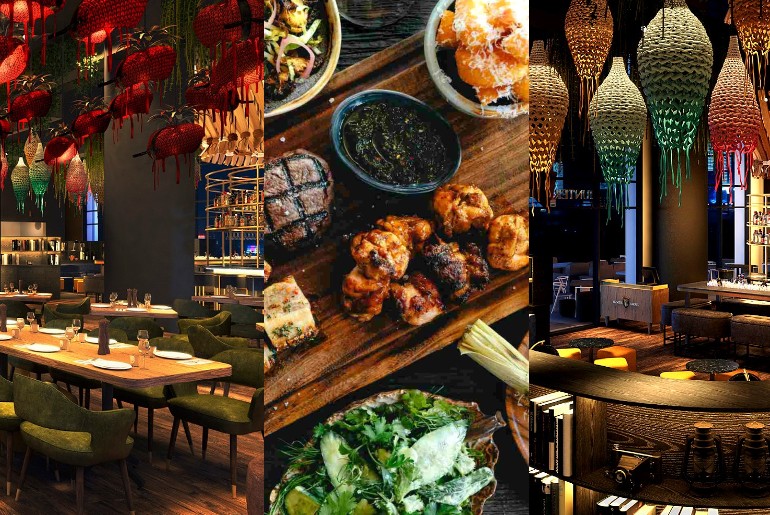 Paradiso is a globally recognised Mediterranean restaurant that was born in Cannes. Nicole Rubi is part of a Michelin-starred culinary duo. Chef Pierre Gagnaire and the woman of Nice’s La Petite Maison. Light gourmet dishes made using local and seasonal ingredients are their medium. Classic Mediterranean dishes are reimagined and given a Renaissance twist. Nicole’s Petits Farcis, for example, should be on the menu. This refers to stuffed veggies, most commonly courgettes. Escargots with a strong flavour. Bavaroise made with cauliflower. The signature pizza of Paradiso. Also, spice-preserved lamb shoulder. Diners will also be able to select from a wide range of Pasta options. Young cockerel roasted. Aside from that, there’s grilled prime rib of beef. Emanuele Balestra, the guy behind the mixology, explained that the restaurant’s botanical motif is carried over into the creation of the signature beverages. The interiors will be exquisitely luxurious. Stunning design and a large deck. 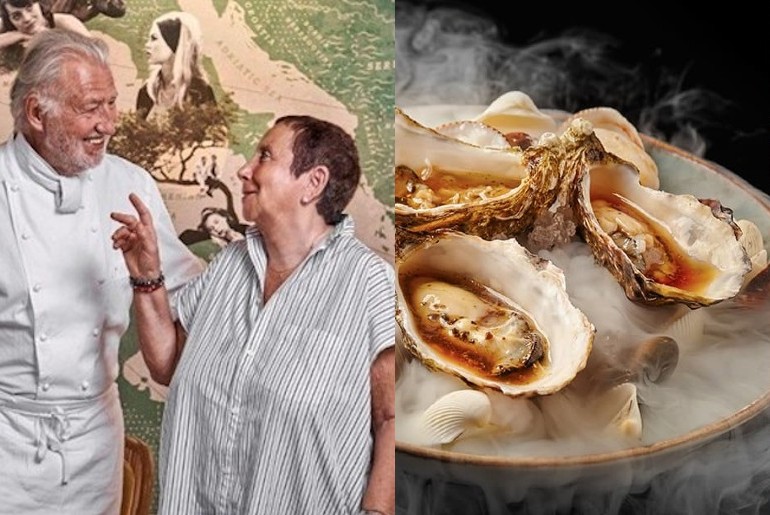 Also Read: This Multi-Billion-Dollar Restaurant Will Be Home To 30 Exciting F&B Projects On The Yas Island This Month

The organisation behind such Dubai big hospitality projects as Lock, Stock & Barrel, STK, and Asia Asia has announced that the latter will open in Yas Bay. The award-winning pan-Asian restaurant is noted for its lively environment and delicious combination of Asian and Middle Eastern flavours. Also, seek for a beautiful patio with a view of the new Bay. 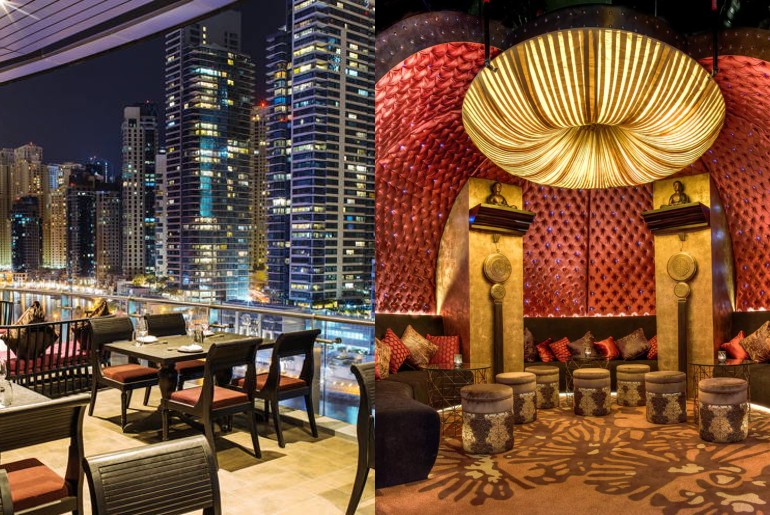 The first impressions of a new entertainment destination According to The Central, the new Yas Bay development would include an arcade complex with Pac Man, air hockey, and simulators. WOAH!!! There is also a classic diner on the premises. This restaurant will feature a variety of American comfort meals. It’s even been suggested that it could feature a bowling lane. Blowing! 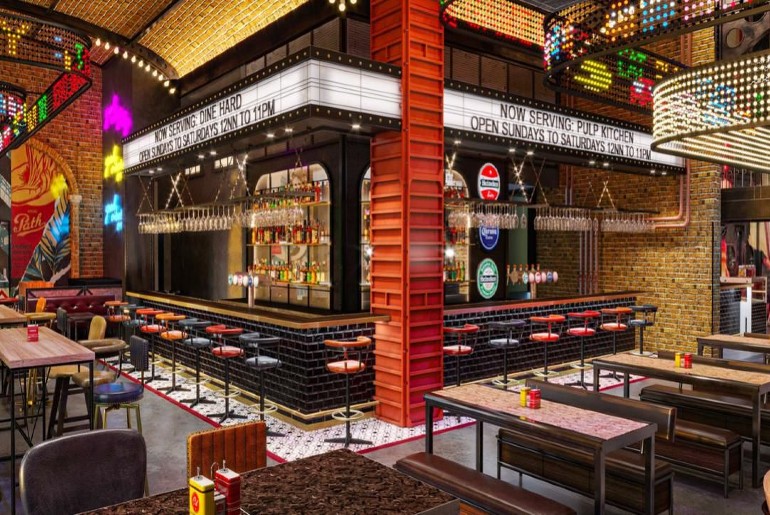 Lock, Stock and Barrel, another excellent hit from the Solutions Leisure Group, has been the go-to party-until-the-wee hours location for a few years now. If the restrictions allow, there will be live music and plenty of dancefloor area. There’s also an international nibbles menu. At this Yas Bay location, the restaurant serves its unique metre-long flatbread. Let’s get it started! 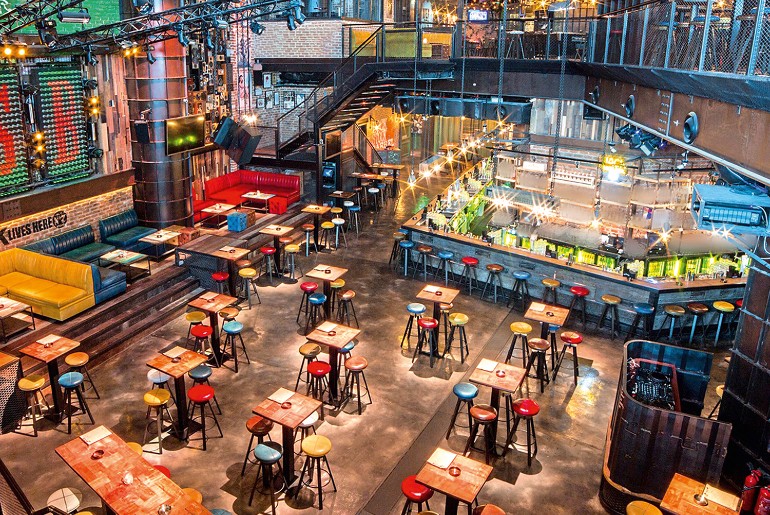 10. The Trilogy by Buddha Bar AKA Siddharta, Zeera and Bushra

It will be a magnificent rooftop playground, according to Capital Motion, the team behind Siddharta Lounge Abu Dhabi by Buddha Bar. A Mediterranean meal is also available. Clever mixology, breath-taking views, and cutting-edge concept events. In fact, Yas Bay will soon be home to two more fascinating Buddha-Bar concepts. 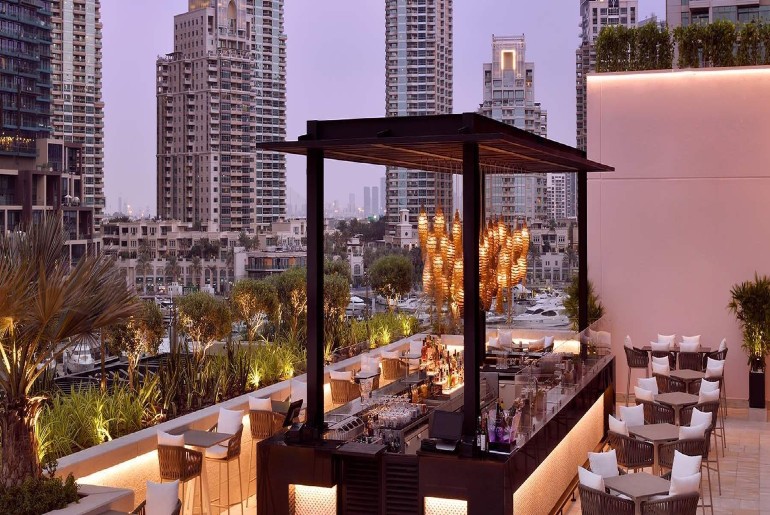 At Yas Bay Waterfront, the newest addition to the Capital Motion portfolio will provide guests with a truly unique experience at a world-class entertainment facility. Cafe Del Mar is legendary on the Balearic Islands. It launched an untold amount of chilled house playlists during its 40-year nonstop party programme. Almost every DJ hall of famer has performed here. And it’s become an indisputable part of the Ibiza music phenomenon. In Phuket, Tenerife, and mainland Spain, new Cafe Del Mar locations have opened. 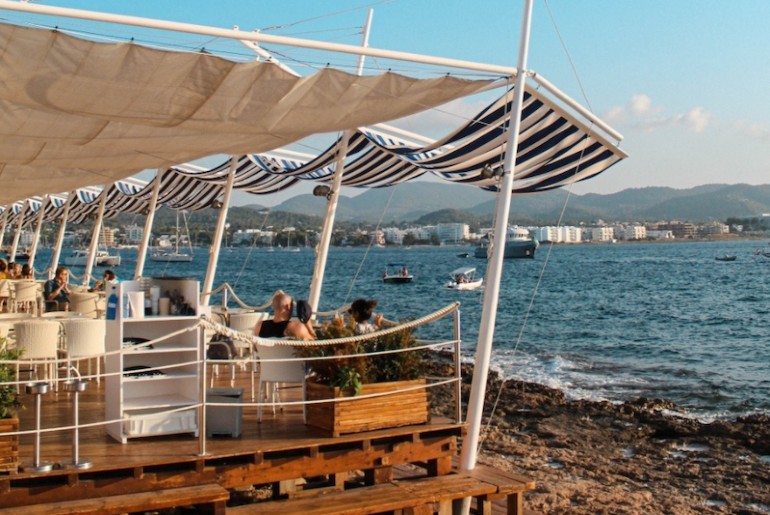 The eating scene in the nation’s capital is devouring the Big Apple. Emmy Squared, a New York-based pizzeria, is expanding to Abu Dhabi’s Yas Bay. This defender of good carbs specialises in Detroit-style pizza. A square pizza with a crispy bottom, fluffy dough, caramelised cheesy frico crust, and trademark sauce stripes. Emmy Squared has 13 sites in the East and South East of the USA, while being a brand that is little over five years old. They serve a variety of red and white pizzas, both traditional and creatively topped. It’s also not just about the pizza. According to their website, The Tennessean & Nashville Lifestyles named their double-stack burger, the Le Big Matt, the “number one best burger in Nashville.” Gothamist named it one of the “Best New Burgers in NYC.” The Infatuation named it one of the ’20 Best Burgers in NYC.’ You’ll be able to couple your crust-stuffing with a variety of adult beverages, including custom mixology, because it’ll be a licenced venue. 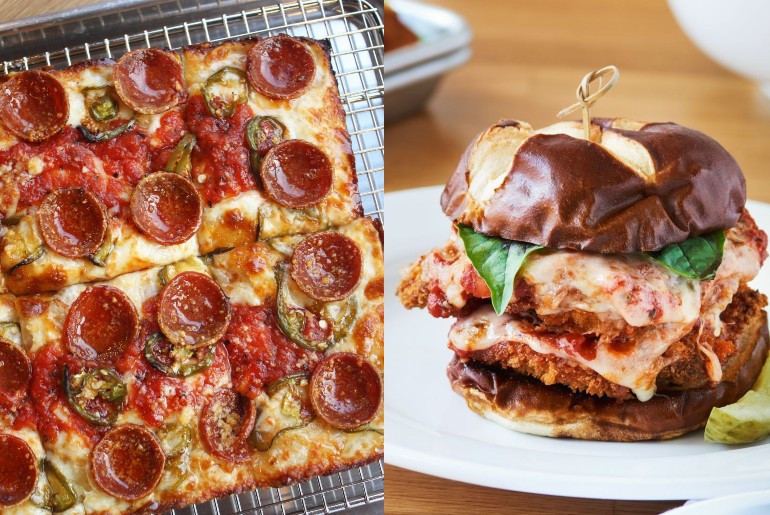