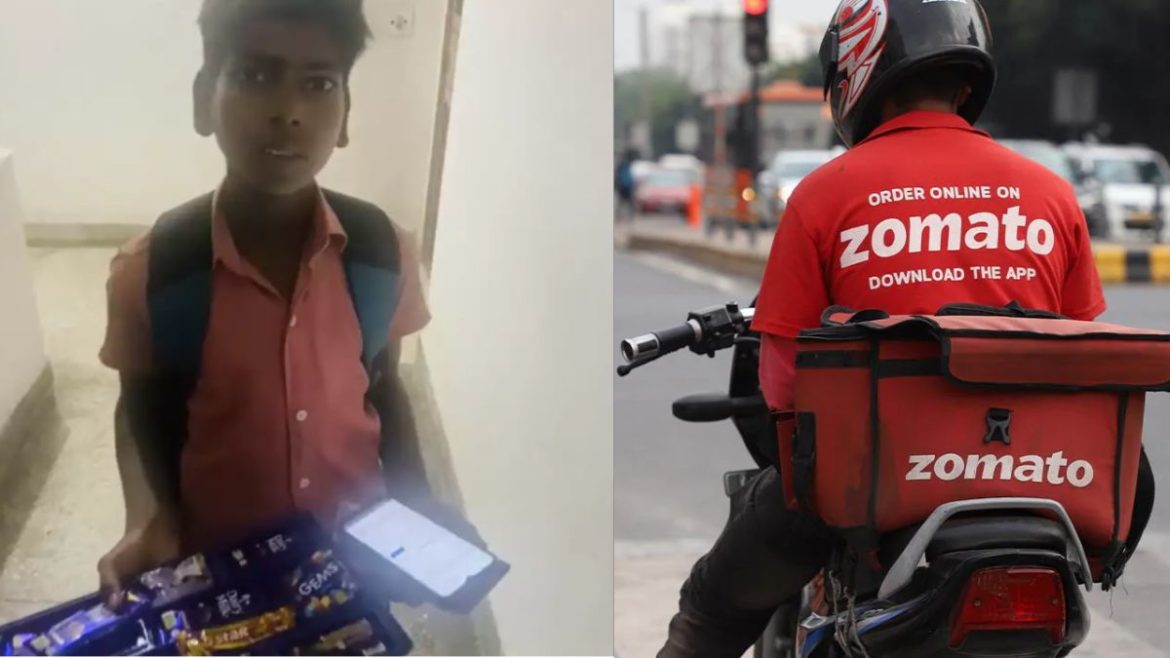 Life as a whole is often known to never go according to one’s plan or at least possess certain challenges that can be hard to overcome. Every time you open any social media platform, you can’t help but come across stories of people struggling with the basics of things all over the world. One such story is that of a Zomato delivery boy. Yes, you read that right- A BOY! A video posted by Social Entrepreneur Rahul Mittal with over 40,000 Views has been doing the rounds on the internet. This video was taken by Mittal when the Seven year old boy had turned up on his doorstep as a Zomato delivery executive.

As you continue watching the video, you can see the boy holding a box of chocolates in one hand while explaining what his day looks like and how he started working to support his family after his father met with an accident. According to his narration, the boy travels from door to door delivering food from 6PM to 11PM after he finishes his school in the morning. This video shook the internet community and made people very emotional, some even asked Mittal to share his contact details as they wish to support his education now. One of the Social media users went as far as to say that if this boy’s sheer hard work, determination, his helping nature and patience was actually diverted towards his education than he can do

This 7 year boy is doing his father job as his father met with an accident the boy go to school in the morning and after 6 he work as a delivery boy for @zomato we need to motivate the energy of this boy and help his father to get into feet #zomato pic.twitter.com/5KqBv6OVVG

Zomato’s Response To The Situation

Zomato later issued a statement thanking the internet community for bringing this boy’s story to their attention. The company said that even though there were manifold violations like child labour and misrepresentation, they will not be taking any strict actions against the family considering the situation they are in. In a statement issued by a Zomato spokesperson, they also said- “We have offered to support the 14-year-old’s education through the Zomato Future Foundation. The father onboarded on Zomato post his accident; therefore, the accidental support we offer to our active delivery partners cannot be extended to him. As an exception and on humanitarian grounds, our teams have extended whatever support was possible in the said situation,”

Meanwhile in another tweet posted by Rahul Mittal, the boy reportedly said that Zomato had also freezed his father’s account and that he was unable to work. The entrepreneur also went on to update the users of internet that the boy is not doing labour work anymore and that Zomato has also financially helped his family.
This moving story of a Zomato delivery boy really embraces the famous idiom- “All’s well that ends well”