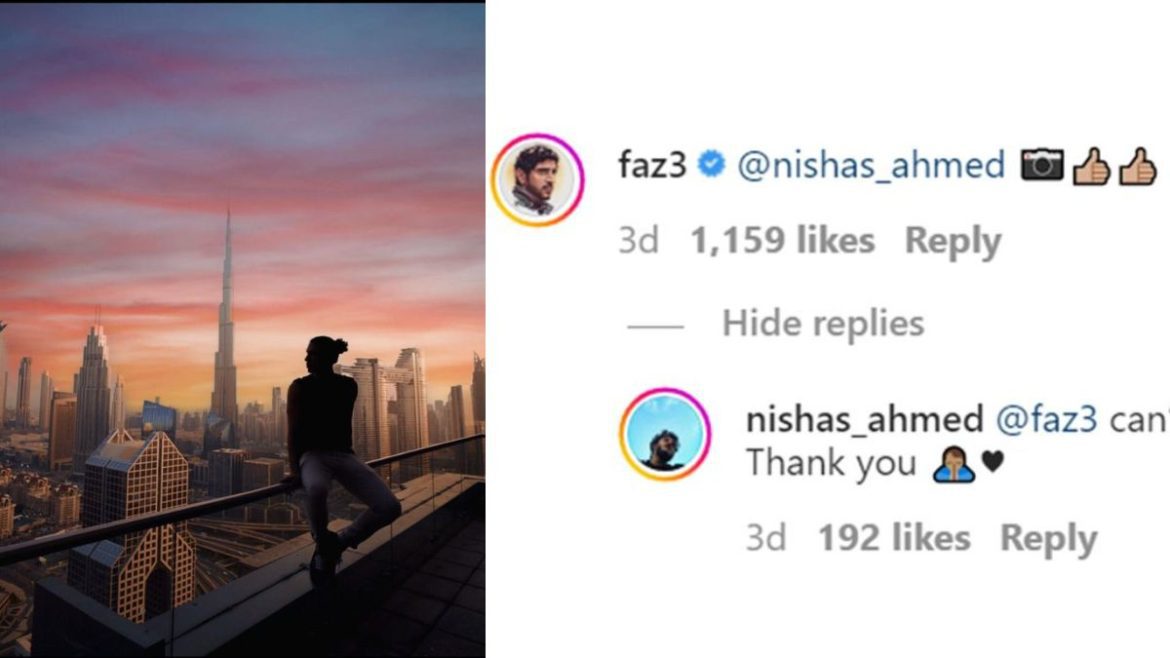 The time was Monday night. Nishas Ahmed, an Indian immigrant, living in Dubai, was unwinding in his apartment after work when he unexpectedly saw a unique Instagram notification. Sheikh Hamdan bin Mohammed bin Rashid Al Maktoum, Crown Prince of Dubai and Chairman of the Executive Council, has just made a remark on a picture he had uploaded.

Two thumbs-up emojis were used in the Crown Prince of Dubai’s Instagram remark to show his appreciation for Ahmed’s shot, which goes by the name @faz3. The famed Burj Khalifa in Dubai and other towers along Sheikh Zayed Road can be seen in the backdrop of the shot, which the 28-year-old Keralite took. The image also features one of his American pals sitting on a terrace railing.

In the talks with Gulf news, Nishas Ahmed said that his relatives and friends were all joyful. He has great respect for the Prince and hopes to one day meet him.

This is the picture which got appreciation from Sheikh Hamdan on Instagram:

Prince Loves To Appreciate People On The Social Media

Sheikh Hamdan has responded to the image of Ahmed before. He had previously loved Ahmed’s photo of a boat passing in front of the Dubai Mall Fountain that she had uploaded last year. However, 2019 saw the relocation of Ahmed, who works for a logistics firm. As a freelance photographer, he captures images.

In college, he often used his phone to shoot images. He was given a camera to use five years ago by one of his pals. He now works as a freelance photographer while taking pictures in his spare time. In the state of Kerala, Ahmed is from Calicut.

Really, such appreciation from the Prince itself gives a lot of motivation.