I had always dreamt of living the Nazrein Milana Nizrein Churana experience from Jaane Tu… Ya Jaane Na, travelling on the back of a truck with my besties. While that did not exactly happen to this nomadic traveller yet, what happened is beyond surreal. Not in the plains, but we travelled at the edge of the high mountains in Himachal standing on the back of a 4/4 Isuzu. We had to be super careful and clasp the rod in front of us all the while. But the adrenaline rush derived from the journey was phenomenal to the next level. Ask about the best part, the road was empty, and we almost shouted our hearts out at every narrow turn, as we passed by the snowy scapes. Read on to know how our journey started.

Ditching The Manali Crowd To Explore The Road Least Taken!

It was the day of Christmas and we had put up at Himalayan Brothers Adventure homestay in Himachal’s Naggar. Ditching the crowd of Manali, we decided to embark on a high-altitude off-roading tour from our homestay. So, the owner of the homestay named Vrighu took out his Isuzu to drive us to the hilly roads least taken by tourists. We first went to Soyal, which has a gurgling stream cutting through the pine forest. From Soyal, we journeyed up to Maniram Dhaba beside Jana waterfall, which serves authentic Himachali thali. After relishing home-style food at the mountain dhaba, we geared up for the adventurous ride.

As we got on the back of the Isuzu, Vrighu shouted,”Ready ho jao, saamne bohot tagda view aane wala hain!” ( Get ready, excellent views are coming on the way). As the car started moving, I felt a chill down my spine. Looking at the valley beside was drop-dead scary, but the road ahead was equally mesmerising. I was overjoyed and emotional. After travelling a few metres, we saw cascading streams, snow-covered expanses, pines, deodars and much more. On one side, there was the pristine valley. On the other, there were thick jungles, parts of which had turned white due to snow. It was around 3:30 PM. The soft sun was merging magically with the white mountains. Everything around was casting a beautiful shadow on us. 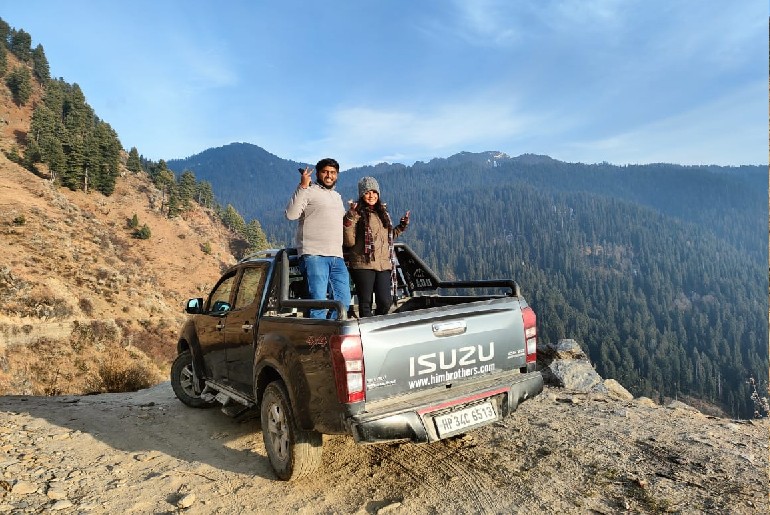 To take a breather, Vrighu halted the car midway. We stood and watched the sun glistening in full mirth above the peaks. The air was cold and fresh. The road, deprived of tourists, was remarkably spick and span.

After a short break, Vighu continued to ride again. Two local kids, who did not seem to have come across many strangers, greeted us by doing ‘hi’ from a distance. Unlike cities, everyone is so welcoming in the mountains. The gesture of the kids was so heartwarming. We responded to them by waving our hands too. Also, there were baby monkeys on the way. But they crossed a road without causing any harm. Vighu assured that the monkeys in that region are shy in nature. 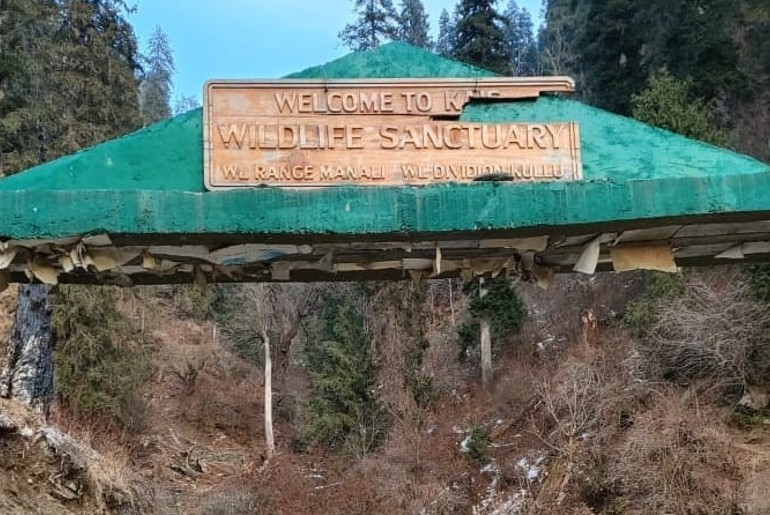 However, we couldn’t travel beyond a certain point as the road was closed due to heavy snowfall. Beyond the Kais Wildlife Sanctuary, lies the peaceful Bijli Mahadev Temple too, at a height of around 8071 feet.

Inside the sanctuary, we strolled through the snowy paths for some time. We also spotted a couple of Himalayan monals. As the sun began to sink in the west, we had to prepare to return too. On the way of return, we sat inside the car it was dark outside.

The experience still seems like a fairytale, only to be proven true by the pictures.