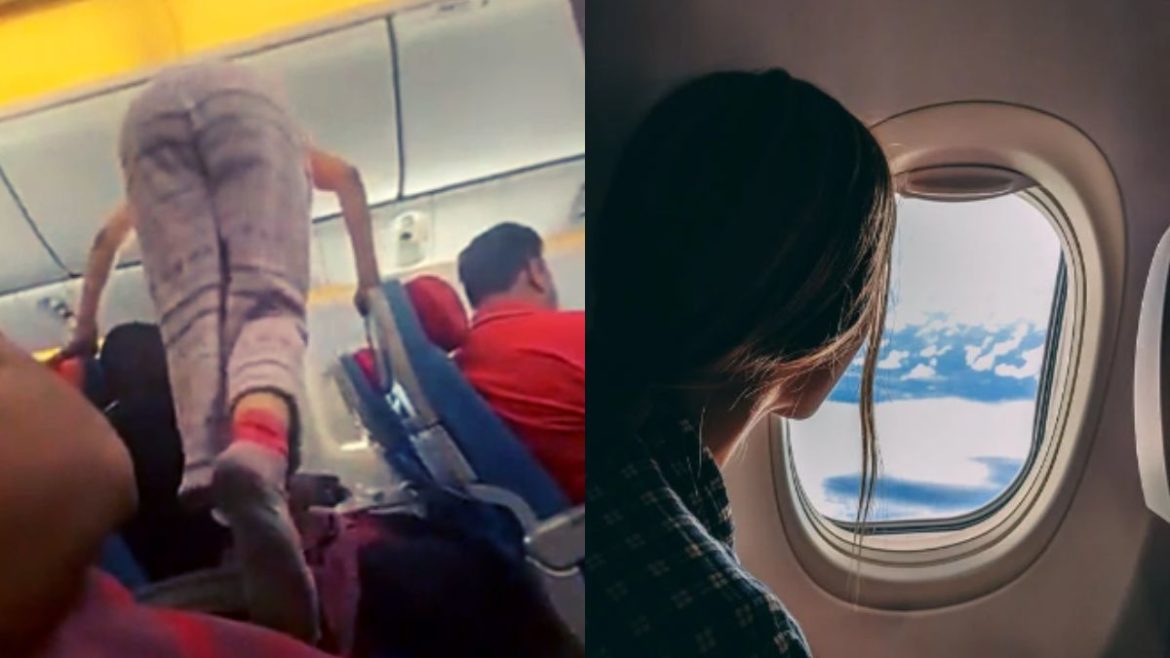 The Twitterati has the most bizarre, interesting and offbeat incidents to draw your attention to. And once again, a video clip shared by a Twitter user has gone viral, drawing criticism as well shock as it goes viral. This clip shows a woman in a flight climbing the armrest from the aisle, stepping over the passengers to reach her window seat. While doing so, an in-flight passenger caught the entire action on camera.

Woman Steps Over Passenger To Reach Her Window Seat

The user who shared the video tagged the woman’s action as a ‘criminal activity.’ He also claimed that she kept doing this throughout the 7-hour flight. Take a look at the video that Brandon, with the username @In_jedi shared –

The most criminal activity I’ve ever seen on an airplane. This woman was hopping over other passengers the whole 7 hour flight. @PassengerShame pic.twitter.com/drET3BGBWv

From the looks of the video, her fellow passengers did not seem to be much bothered by her stepping over their armrests to finally get to her seat.

In-flight incidents with weird passengers or bad experiences with flights have always grabbed attention. Well, this video also belongs to that lot which has divided the internet. While some were taken aback by her actions, there were some who came out in her support.

Take a look at what the netizens had to say regarding seat hopping and if it is actually possible for people to do this.

So each time she has to leave, or get back to her seat, her fellow passengers including baby, have to get up and jostle in the aisle. Much easier to do what she did and those seated near her didnt seem to mind. That is what matters most.

A few were also irked by the fact the woman wore no shoes to the restroom and stepped over the passengers.

So, she goes to the lav in socks, picks up some urine and fecal bits on them, sprinkle some more gross things from the galley and aisle, then put those disgusting things on my armrest? No thanks!

Are all of you ignoring the manspreading and the lack of room for her to slide in? This is a very dumb video…

Maybe instead of complaining about girl.
It’s better to pay attention to fact that there is so little space in airplanes that sometimes it’s even hard to fit a legs, let alone for two people to fit in aisle. For me, the biggest problem is that airlines treat people like luggage

What do you think of the woman’s action? Will you be able to pull off something like this? Let us know!