Did You Know There’s A Giant Hand In The Middle Of The Desert In Chile?

You’re in the middle of a desert. It’s hot and dreamy. Sand is all you see till the world’s end. The far horizon is glittering golden below a round yellow sun. The heat is making your vision blurry like it does. It’s just you and nothingness cruising through the big expansive arid wild when suddenly you see a giant hand waving at you! A huge fantastical hand as if rising from the ground reaches out of sand to bid you farewell. We’re not just making you visualise a fantasy world. This is real! Chile’s Atacama Desert has the most unusual monument. A concrete hand lays open for visitors an hour south of Antofagasta.

The Hand Of The Desert Was Sculpted In 1992

La Mano del Desierto or ‘the Hand of the Desert’ was sculpted in 1992. Port city Antofagasta is the regional capital of Chile’s copper mining industry. They decided to wow viewers in the barren desert with a hand taller than an NFL goal post. It extends 36 feet into the air free without fences, open to everyone. It’s like they’re quite literally extending an open hand. 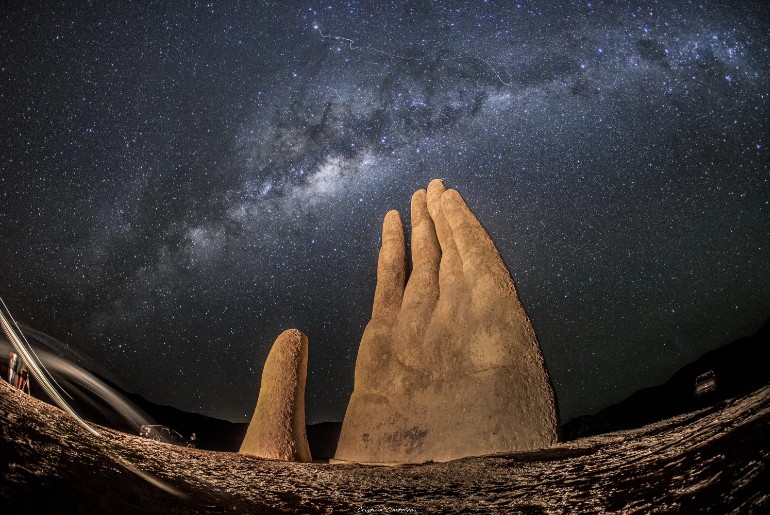 There’s nothing else in any direction but sand and more sand. The hand stands there alone ruling an empty kingdom with the strength of concrete to see it through the years. Its exact location is kilometer marker 1309 on the Pan-American Highway. The Hand of the Desert is actually a sequel to its creator Mario Irarrázabal’s right hand in Uruguay which has many names: Man Emerging to Life, Monument to the Drowned and The Hand. Is a giant man holding South America together?

Also read: Tom’s Diner In The USA Charged A Customer ₹27 For A Stupid Question

This otherworldly desert is the driest in the world outside of the polar regions. Its open area of 105,000 km sq has been used by NASA to test Martian rovers! The Hand of the Desert then is no accident in this landscape. Its location was deliberately chosen to change the nature of land without barriers with a monument without fences. You can touch it, lean on it but are not allowed to climb it. However, no one is there to keep you in check except the slippery smooth fingers themselves. As a result, Chile’s obscure art is often covered in Spanish words, graffiti, profanity and dirt. Every 6 months, community organization responsible for its financing, Corporación Pro Antofagasta gets it cleaned. 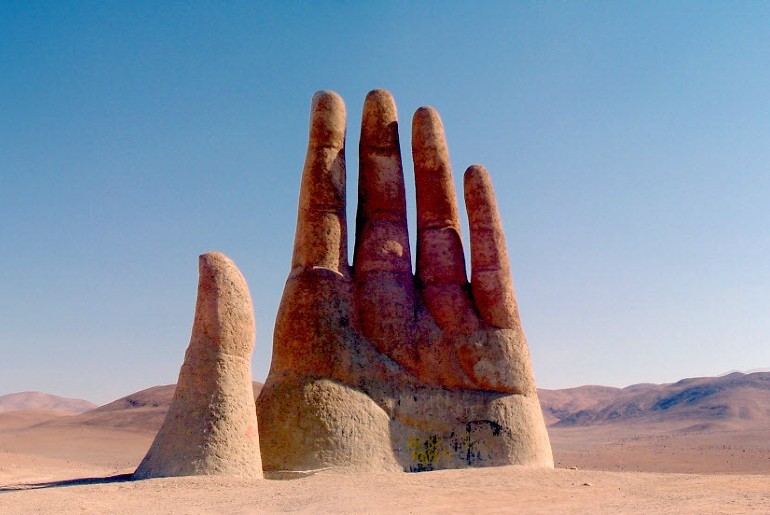 Also read: Space Travel: Japanese Billionaire Is Looking For A ‘Life Partner’ To Make A Trip Around The Moon!

This part of Chile has nothing else except Cerro Paranal observatory further down south which boasts of South America’s largest telescopes and the hotel that James Bond burns down in Quantum of Solace. The Hand of the Desert is art at its best, disturbing the unperturbed and free to all. Add this one to your travel bucket 2020!