The list of incredible things happening during the course of the coronavirus lockdown just keeps increasing and we couldn’t be happier! Adding to this hopefully non-exhaustive list is the absolutely fabulous news that a rare and exotic ornate eagle ray has been spotted in the Great Barrier Reef after 45 freaking years!

With little more than 50 sightings recorded worldwide, the eagle ray has been dubbed as the ‘the unicorn of the sea’ by divers. And now, after nearly 4 and a half decades, the eagle ray (Aetomylaeus vespertilio) has been captured on camera in Australia’s Great Barrier Reef.

The footage, which was captured by Jacinta Shackleton, a marine biologist and conservationist, shows the majestic creature swimming gloriously in the blue waters of the reef. Having never seen the ornate ray before in her life, Jacinta took to Instagram to share this rather emotional moment she had.

An endangered Ornate eagle ray soaking up the morning sun today?This was an incredibly special first encounter for me of a very rare species and something I’ll never forget. The current situation has made me aware of just how fortunate I am to have spent so much time immersed in nature ? . . . . . #eagleray #ornate #endangeredspecies #ray #protectwhatyoulove #greatbarrierreef #reef #seeaustralia #thisisqueensland #lovethereef #ladyelliotisland #earthcapture #exploremore #nationalgeographic #patterns #amazinganimals #ocean #animals #marinelife #beautiful #nature #postponedontcancel #holiday #escape #dive #special #happiness #love #marineconservation

The biologist first spotted the ray on March 25; however, she had no camera on her then. Two weeks later, she came across another eagle ray while free diving and this time she around, she managed to capture the ray dreamily swimming in the sea waters.

What makes this sighting exciting is the fact that the ornate eagle ray is an extremely scarce species. According to marine biologists, the species is getting rarer day by day, so much so that its numbers have halved over the last 45 years. So spotting the ray not just once but twice is incredible news for the researchers. 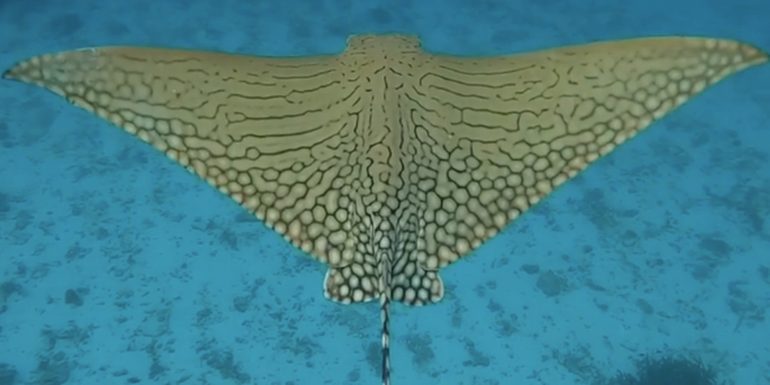 About The Ornate Eagle Ray

Classified as endangered as per the IUCN, the ornate eagle rays are very rare. Their depleting population can be attributed to demersal fisheries because of which the species are caught and retained or sold in the fish market. And unfortunately, no proper conservation measures have been initiated for this species so far.

On both occasions, the rare species was spotted close to Lady Elliot Island in the Great Barrier Reef. The reef is the world’s largest coral reef system, composed of more than 2900 individual reefs and 900 islands. It is also the world’s biggest single structure made by living organisms called coral polyps. One fun fact about the the Great Barrier Reef is that it is so big that it can be spotted from outer space.

The sighting of this rare species is rather extraordinary! And we hope these pieces of good news keep coming! It makes the lockdown a bit easier to bear!

Also Read: Dolphins Have Reportedly Made A Comeback To Kolkata After 3 Decades