Fly Though The World’s Longest Zip Line In the UAE 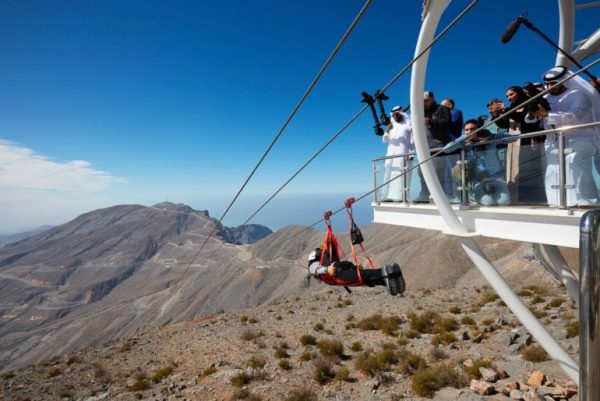 Guinness World Records have recently certified this as the longest zip line in the world, to be found in Ras Al-Khaimah, measuring 2.83 kilometers in length and it is suspended over 1,680 meters above sea level at the peak of the Jebel Jais Mountain. You’ll be passing over enthralling views of the mountains and gliding past the rocky terrain. The Jebel Jais flight is a thrill-seeking adventure sport that will take you atop the country’s largest mountain peak from a launch pad.

It is known that you’ll be suspended and gliding in the air for almost 3 minutes at a stretch. Whoa! It’s an effort to attract more tourists to a lesser known place, Ras Al-Khaimah and promote tourism. To add to the credits of going though over this thrilling adventure, you will also get an official Jebel Jais Flight certificate, a picture against the Jais Wall of Fame, and Go Pro footage for a limited period of time.