Gevora Hotel, The Tallest Hotel In Dubai Has Opened Up With A Height Of 356 Meters 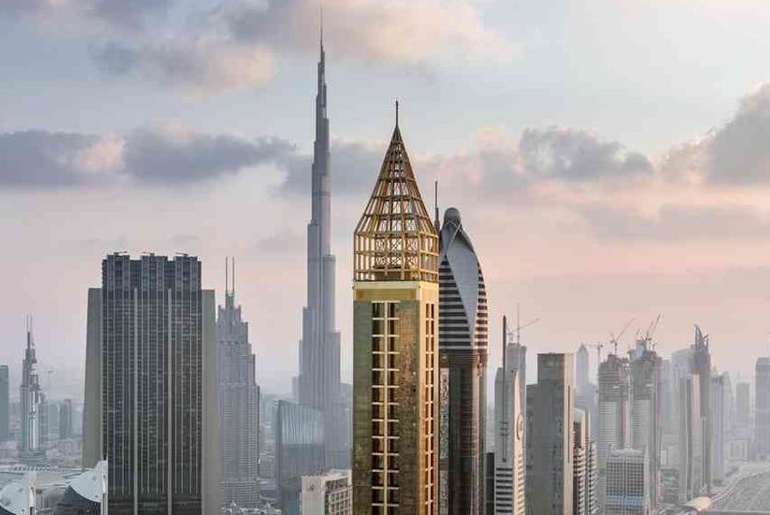 Dubai launches its brand new 75-storey hotel, the Gevora Hotel, which is 356 meters (quarter of a mile) high and it opens today!

Dubai is set to break its own record by launching the tallest hotel in the world. One meter taller than Dubai’s JW Mariott Marquis, Gevora Hotel now opens up and is nearly quarter of a mile high. It has opened to the public, today (12th February). The highlight of the hotel is definitely the rooftop pool that it lavishly boasts about. To give you perspective, that’s 32 metres taller than the Eiffel Tower.

Also read: Dubai To Get The World’s First Floating Kitchen

Pool days are about to get so much better!

Along with the rooftop pool, the gleaming gold hotel has 528 rooms in total and the rooms are all the way to the top floor. The 75-storey Gevora Hotel also has four restaurants, an open-air pool deck, a luxury spa on the 71st floor, plus a health club and Jacuzzi. For leisurely lunches and dinners, you’ll find a fine dining restaurant on the 12th floor, plus a pool-side bar serving food.

Also read: Raffles Dubai Does The Most Expensive Facial In The World With 24-Karat Gold

Gevora aside, Dubai also houses a significant number of the world’s highest hotels (aside from the JW Marriott Marquis), such as the Rose Rayhaan by Rotana, Burj Al Arab and Jumeirah Emirates Towers Hotel. Dubai is also home to the world’s tallest building – The Burj Khalifa, 828 metres (half a mile) high. Gevora will be joining the list of toweringly tall hotels across the globe including Kuala Lumpur’s Four Seasons Place, Thailand’s Baiyoke Tower II and China’s Wuxi Maoye City – Marriott Hotel.