Indulge In Cave Tubing In This Underground River In Indonesia 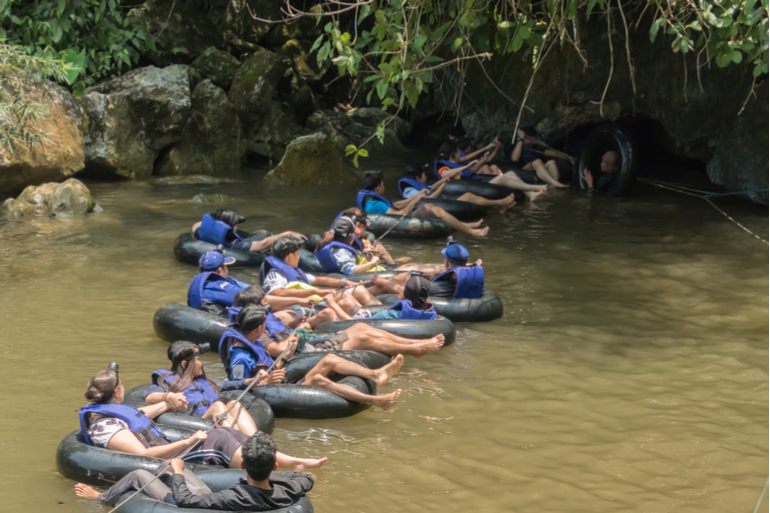 Experience the whimsical journey of unravelling an underground river in Goa Pindul cave through cave tubing in Indonesia.

Float with tires above the water on this underground river inside the Pindul Cave, an offbeat experience that you can indulge in which is about 7 km south of the city centre Wonosari, Gunung Kidul, Indonesia. Pindul cave has a length of about 350m and width of up to 5m, a distance of water surface with a cave roof of 4m and a water depth of around 5-12 km.

Cav tubing is almost similar to rafting, cave tubing uses an inner tube to float above the water and explore the cave.

Also read: How Cheap Is Bali? The Pindul cave is divided into 3 zones, dark zone, bright zone, and dim zone with a travel time of around 45 minutes.

The calm flow of water in the Goa Pindul Cave makes Cave Tubing a thrilling opportunity for adventure junkies to indulge in. Get to unravel the cave while you float above water and witness the nature’s wonder like sunshine gliding through a hole in the ceiling of the cave and the formations of the cave. The stalactites are a major attraction in the cave, one particular stalactite is the fourth biggest in the world found in the Pindul cave.

You’ll be provided with all the equipment which will include float tire, life jacket, rubber shoes and headlamp.

In the light zone, you can even swim and jump into the fresh water. Enjoy this unique adventure located at Gunung Kidul, Yogyakarta, Pindul cave.

also read: Singapore, Indonesia & Malaysia To Now Have One Visa Only