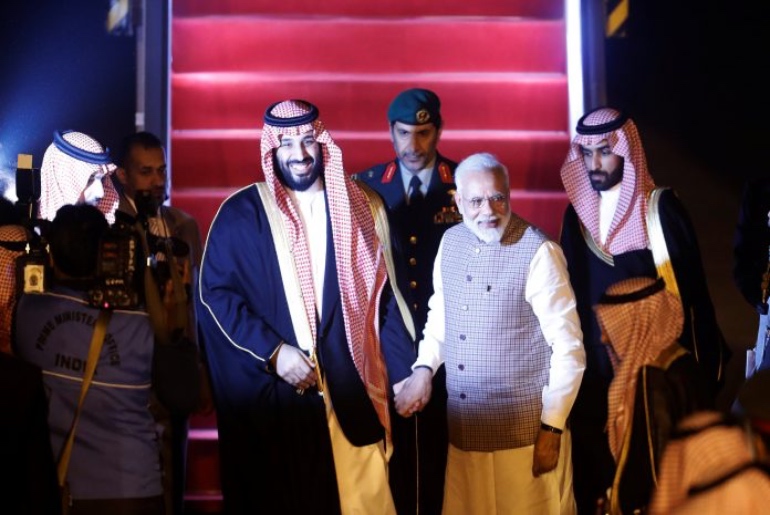 Saudi’s Crown Prince Mohammed Bin Salman is on his three-day Asian tour and we must say he truly is living life ‘King’ size! Here’s how India and Pakistan welcomed the Prince.

After a Royal welcome in Pakistan, Saudi’s Crown Prince Mohammed Bin Salman arrived in India. PM Modi, broke all protocols, and personally received the Crown Prince with a warm hug at the Palam airport. Now, that was a loving gesture to make the Prince’s first visit to India, a memorable one.

His visit highlights discussion on several subjects including the unfortunate Pulwama attack, release of 850 Indian prisoners lodged in Saudi jails, increase in quota for Indian Haj pilgrims and much more.

Meanwhile, in case you haven’t witnessed true ‘Royalty’, here’s something for you! Saudi’s Crown Prince Mohammed Bin Salman kicked off his Asian tour with Pakistan and the welcome he received there definitely deserves a mention. Pakistan recognized Prince Mohammed ‘s visit as one of the highest profile visits in decades and we must say, they left no stone unturned to make the Prince’s trip a one to cherish.

Welcome welcome Muhammad bin Salman welcome ??
InshAllah this historic visit of MBS will strengthen the bond b/w the people of Pak and Saudi into a strong metallic bond#CrownPrinceinPakistan#PakSaudiFriendship pic.twitter.com/jk6aNoPQpX

Fighter jets escorted Prince Mohammed Bin Salman’s aircraft, as he entered the country. Upon landing, the Saudi Prince was given a red carpet welcome and a 21-gun salute. And the grand welcome did not end there! The Pakistan Government gave the Crown Prince a Royal welcome, with streets flooded with hoardings and billboards of the Crown Prince. And there’s more! Pakistani citizens did their bit too and started off a special hashtag- #WelComeCrownPrince ahead of the trip. How cool is that!

Following the Pakistani tradition, Prime Minister Imran Khan then drove the Saudi Prince to the PM house. Later, the Pakistani leader also called for a dinner reception, where both the leaders addressed the media.