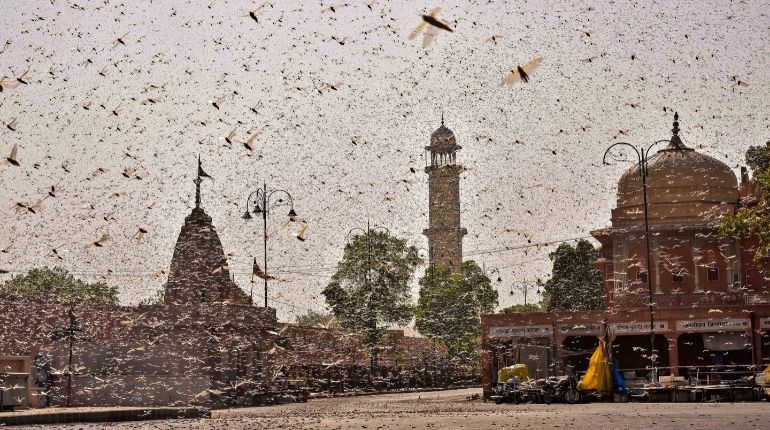 Okay 2020, what else do you have left. First floods, then storms, then of course a pandemic like never before and this time its LOCUSTS! Millions of desert locusts have swarmed 5 states in India, namely Rajasthan, Gujarat, Punjab, Haryana, Uttar Pradesh and Madhya Pradesh and the videos are quite scary. Take a look. The first invasion was detected in Rajasthan on April 11th, 2020.

The whole thing seems almost biblical and screams doomsday. A variant of the locust called desert locusts has made its way to India and this could be one of the worst pest attacks in over 2 decades (26 years). There’s a global locust swarm in existence right now and India could suffer from a brutal wave in the coming months. To give you perspective, Desert Locusts are considered to be the most devastating migratory pests globally and a 1 sq km swarm in 1 day can eat as much food as 35,000 people. Not only do these insects breed rapidly but as many as 150 million locusts can exist in just 1 square kilometre. They feed on any kind of vegetation like crops, fodder and pasture and can destroy crops in seconds.

The sudden increase in locusts has been credited to climate change. The increase in temperature has made it more habitable to the breeding and swarming of locusts. Unusually heavy rains and increased temperatures from 2019 may most likely be the cause of this attack.

There's a global locust swarm in existence right now — the worst in many decades — and India could suffer from a brutal wave in the coming months. A 1 sq km swarm in 1 day can eat as much food as 35,000 people. pic.twitter.com/9raEB4tqwa

Currently, locusts have swarmed through Uttar Pradesh, Rajasthan, Madhya Pradesh, Gujarat, Punjab & Haryana. The Locust Warning Organisation of Rajasthan has already begun sprinkling chemicals in order to kill the locusts. Currently Africa is the worst hit by the locusts, with damages estimated at $8.5 billion to crop and livestock production.

“The swarm of desert locusts entered the state from Amravati district. It then went to Wardha and now it is in Nagpur’s Katol tehsil. Locusts are very dangerous to all types of vegetation. They feed on green leaves and known for devouring crops spread across on acres of land” Joint director of agriculture department, Ravindra Bhosale, told news agency PTI