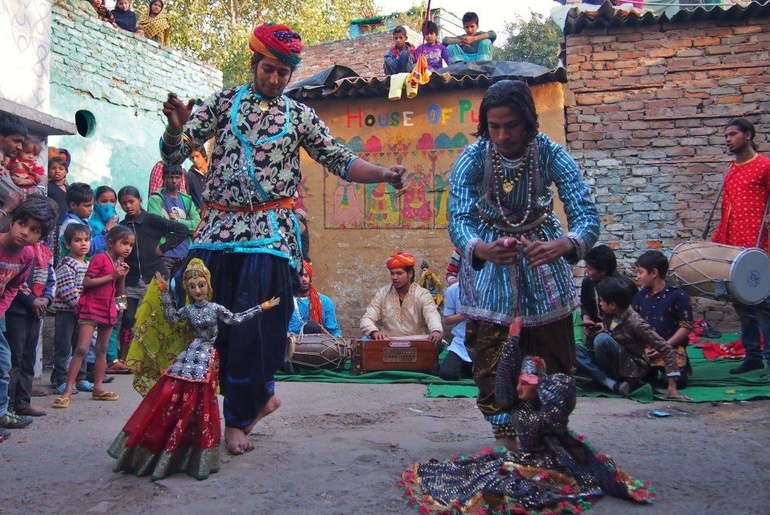 Khatputli colony in Delhi – the land that inspired Salman Rushdie’s 1980 Midnight’s Children is now going through a drastic transformation.

The Khatputli colony is a small settlement of a cluster of craftspeople – puppeteers, magicians, acrobats, musicians who are mainly from Rajasthan and the surrounding regions of Delhi. They earn a living through performing arts in their magic shows and are quite a phenomenon in the city by bringing the streets alive. The rustic charm of the colony and the Bhawai Dance performance, a typical Rajasthani show will captivate you.

Also read: 5 Cafes To Visit In Delhi To Escape The Winter Chills These artists were ambassadors of the Indian culture who have also performed at international events, accompanied by major bureaucrats and diplomats.

You could spot newly puppets drying out on a terrace or craftsmen rehearsing their performances and carving artefacts out of wood.

Although, recently the colony went through a drastic turnover, where the residents have fallen victim to urbanization of the colony. The DDA authorities demolished approx 400 houses in the colony.

The locals had protests carried out against the whole demolition. They’re been given promises of new settlements in multi-storey buildings, but as of now, they’re homeless and scared to be out on the streets.

Also read: Drown Yourself In 22 Types Of Coffees At This Place In Udai Park Delhi Now, all that remains of what was once the largest community of street performers is stones and rubbles and the magic has vanished in the puff of only dust coming off of it. These artists will be moved to newer homes and we can only hope that the art doesn’t get demolished as well.