Things You Should Know About Louvre Abu Dhabi 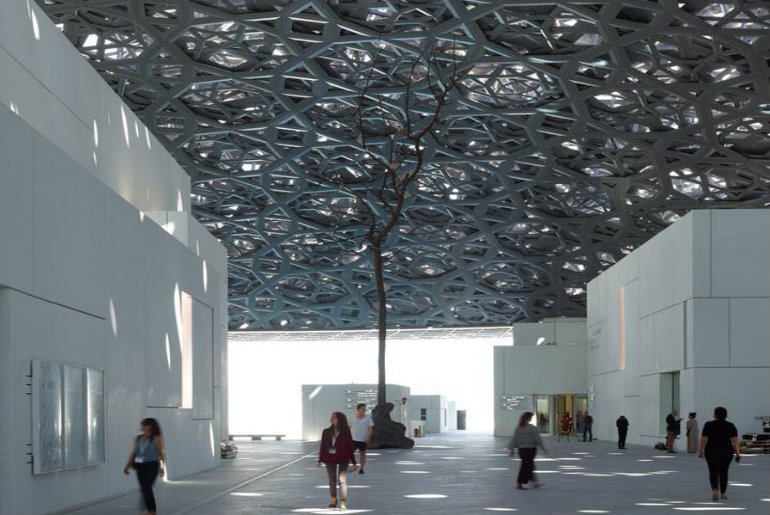 The museum is designed as a seemingly floating dome structure & its web-patterned dome allowing the sun to filter through. Louvre Abu Dhabi is the largest museum in the Arabian Peninsula with a  total area covering approximately 260,000 sq ft. The origin of the Louvre stems from the combination of two cultures, France and the United Arab Emirates to develop a new kind of cultural institution. The museum is rooted in universal human values which means focusing on what unites us: the stories of human creativity that transcend individual cultures or civilizations, the first of its kind in the region. The museum is designed as a seemingly floating dome structure & its web-patterned dome allowing the sun to filter through. The overall effect is meant to represent rays of sunlight passing through date palm fronds in an oasis. Also Read: The White Summer Party Is Back At Coya Dubai

Louvre Abu Dhabi is home to a number of renowned historical pieces & artworks showcasing work from multiple French museums, including the Louvre, the Centre Georges Pompidou, the Musée d’Orsay and the Palace of Versailles. The Louvre is looking forward to displaying the Salvator Mundi by Leonardo Da Vinci, the most expensive painting ever sold as of 2017. Questions have been raised as to the nature of the artworks to be displayed at the museum. However, according to the National, the type and nature of the exhibits planned for the Louvre Abu Dhabi have not been affected by the fact that the museum is in a Muslim country. Nevertheless, a walk through the museum reveals the absence of ancient Greek male nudes, other than medieval or Victorian era fig leaves. You can go for a general tour to admire this ethereal beauty, enjoy a guided tour with a group, explore events at the entire museum-city as it comes alive with music & multicultural performances or become an Art Club Member with an impressive array of benefits: from unlimited entry to special offers, priority reservations and exclusive events.