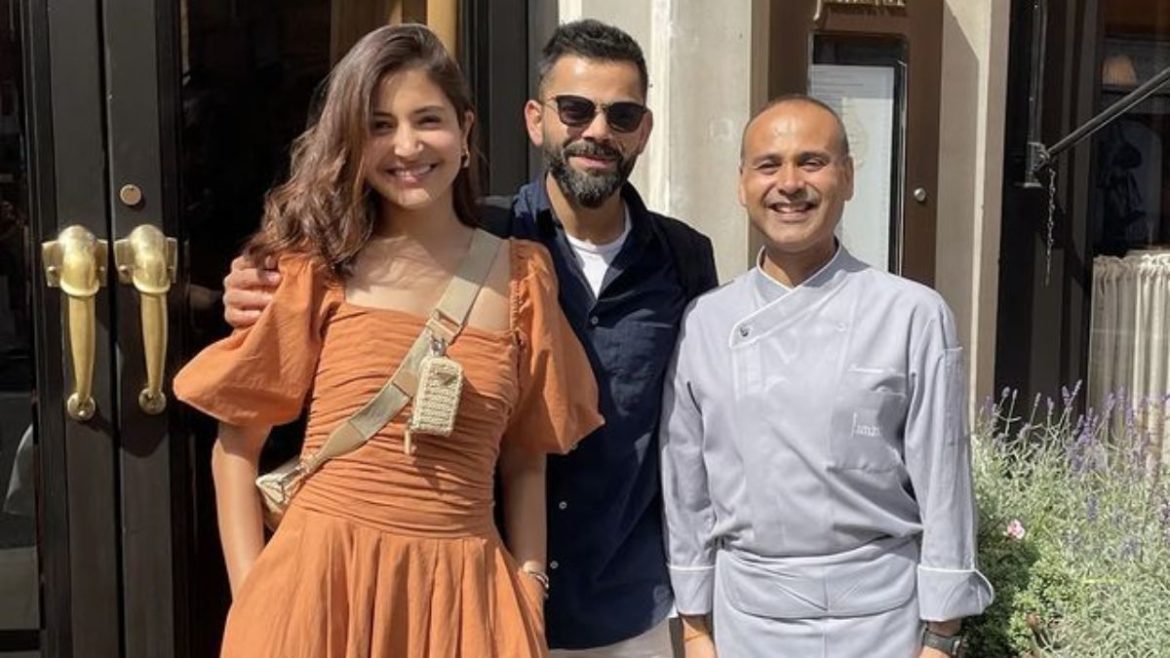 Anushka Sharma and Virat Kohli were in London with their daughter Vamika for quite some time. They flew back to Mumbai today after spending a long holiday in the UK. Many fans spotted them in many places around the city and shared their pictures on social media platforms. Among so many stunning fan interactions, a picture of the power couple with a chef in London went viral on social media. Kohli and Anushka posed with Chef Surender Mohan in front of an Indian restaurant in London.

Recently, the couple relished a delicious lunch in the famous Indian restaurant in London, ‘Jamavar London’. Very excited to host them, Chef Surender Mohan uploaded some happy photos with the couple on Instagram. Virushka absolutely loved dining in the restaurant and enjoyed the food. The chef wrote a heartfelt caption with the pictures. He captioned, ‘My work and wisdom lie in making the best memories and what could be better than cooking for the power couple that the entire India is proud of!!
Thank you @virat.kohli and @anushkasharma for dining with us and I am very happy that you enjoyed the food @jamavarlondon.’

The chef also shared a beautiful picture with the celebrity couple a week back when they went to Bombay Bustle for lunch.

Virat went to England to play against the England cricket team and Anushka also tagged along with him on this journey. After the matches, the couple spent a lot of time together before they get back to India and join their work fields. After spending a long time in the UK, the celebrity couple is back in India now. They landed in Mumbai today and were papped by the paparazzi outside the airport.

Talking about their professional fields, Anushka Sharma will be seen on the OTT screens very soon. We will see her in a new movie after 4 years in Indian cricketer Jhulan Goswami’s biopic, Chakda ‘Xpress, directed by Prosit Roy. And Virat Kohli will next play in the upcoming exciting matches of the Asia Cup, followed by the most anticipated T20 World Cup.