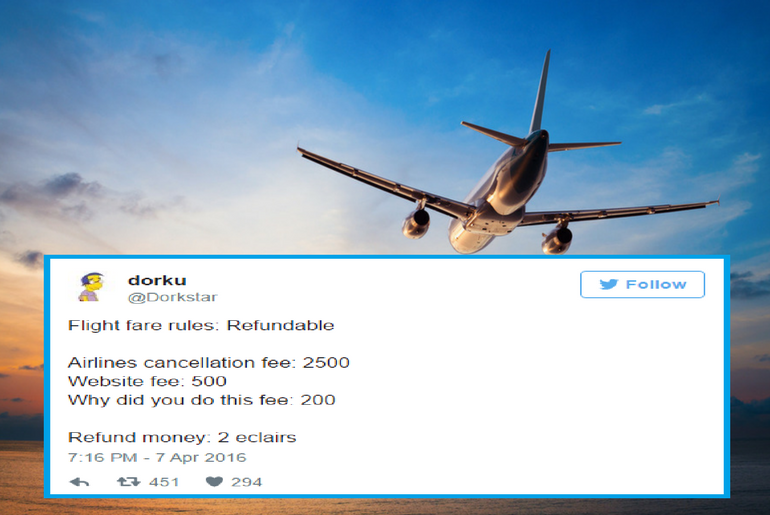 Being a travel blogger has its perks. You get to travel, it broadens your horizons, you get to meet people from diverse cultures and most importantly it’s so much fun! It has its cons too like we already confessed here.

It all starts with you booking your ticket…

Dorku‘s witty break-up of your ticket is actually hilarious.

Pro-tip: Be the first to know about cheapest flights like we told you about Air Asia’s special deal recently.

Moreover, the scariest moment about travelling is when you are boarding and you get a text which reads “have a safe flight” and pnkj nailed it.

Types of People You Meet When You Travel

Boarding flight for the first time in my life. I hope I don't freak out like Kajol in Pyar To Hona Hi Tha.

She is the pseudo-feminist who thrives on advocating women’s rights and is the first to leave her ideologies behind in times of a catastrophe. Rishabh tells you about it!

He will follow you on Twitter, he will like all your FB check-ins and he will also follow you home. First two still seem okay to me, but the last one is sure to send you the chills. Adrak puts it aptly here.

For some, travel adventure is heading to work and back. We agree with them if they happen to witness what Hardik did.

Me: Mumbai is so beautiful early morning, pleasant & this mild fog

5. When the passenger beside you is a cranky kid

A long haul flight and a cranky kid is just a ticket to hell and so we agree with SMH. What about you?

Every time I come close to being okay with the idea of having kids at some point in life, they put a screaming one next to me on a flight.

6. The One Who Never Made It

We have all missed our flight once for reasons we are embarrassed to admit. But Vitasta‘s is my favourite 🙂

Another beautiful day in Delhi after I misread the flight departure time 😂 pic.twitter.com/71VjvOykRw

8. Last but not the least, THAT Famous Guy

Who wouldn’t love to witness the legend of the nasal twang! Pankaj had a star-struck moment with Himesh Reshammiya, or not?

Guess who's in my flight? Oooooo huzuuuuuurrr……

So when you land safe, you can’t help but feel grateful to God

But then this happens

Returning to Mumbai traffic made our editor-in-chief, Kamiya, want to fly back to her vacay spot. Every happened to you?

This Airport Beats Heathrow Airport To Become The...