Would You Ever Try Pasta Biryani & Oregano Raita? 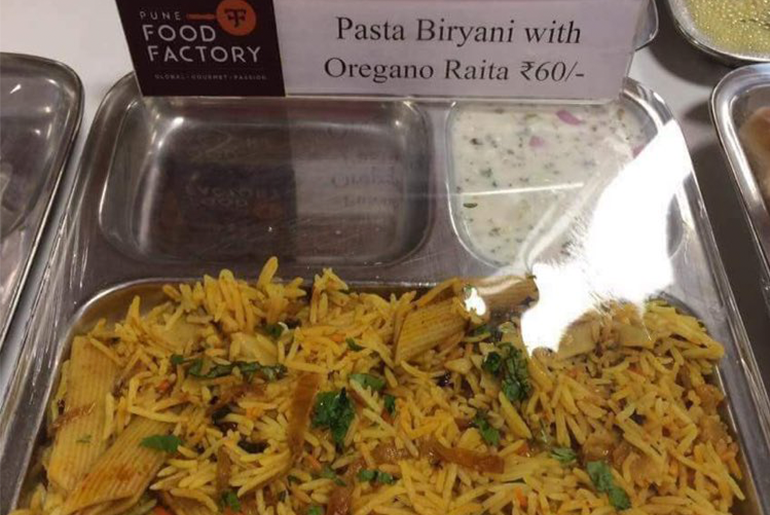 Mix too much Indian with too little Italian? Umm, you get Pasta Biryani & Oregano Raita. Pune Food Factory has done the best or worst! You decide!

Fusion foods are in these days. Every restaurant is trying to make a unique identity in the food and beverage industry. So they keep coming up with one or the other experimental dish. Pune Food Factory tried something with biryani. Let’s see what it is! Image for representation purposes only.

Also Read: 5 Boozing Spots In Pune For When You’re Wallet’s In A Crunch

Pasta Biryani! And Oregano Raita to accompany it! This so called innovation has been trolled on the internet over and over again. But hey! Innovation and creativity don’t quite have a limit there. Pasta Biryani: Biryani made with pasta and rice! No comments! I am wondering how must that be tasting though. After the reactions on twitter, I am a bit skeptical about it.

Accompanying this risky culinary experiment is the Oregano Raita. I’ve heard of cucumber raita, pineapple raita & even gourd raita. This is quite an experiment, I feel.

Also Read: 5 Clubs In Pune That Allow You To Party Late Into The Night!

Italians and Indians don’t mix. Be it politics(congress) or food . Pasta is good biryani is good but biryani-pasta .hey bhagwaan !

I love experiments with food. Unsure about this one though!

Assuming soon there will be Achari milk-shake and Avocado Raita. Possible right?