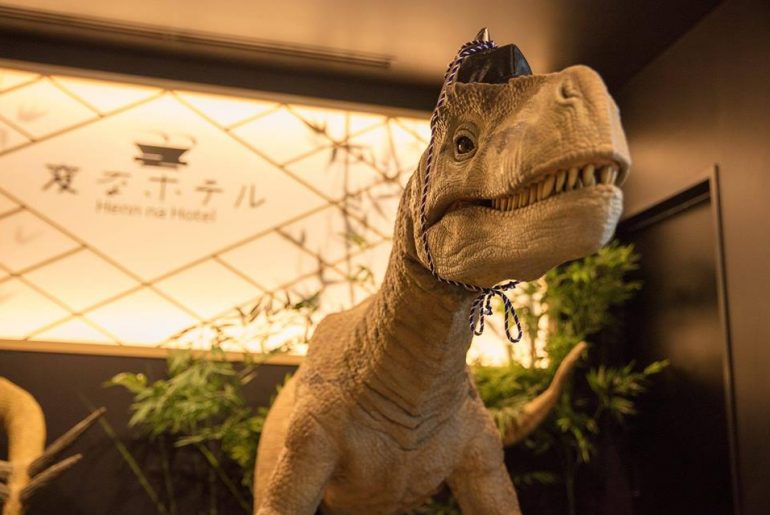 The Henn na Hotel in Japan has installed robot dinosaurs at the reception desk to serve the guests.

The reception desk of the Henn na Hotel will greet you with robot Dinosaurs whose sensors will detect the motion and they bellow ‘Welcome’. The giant Dinosaurs look like the cast members of the Jurassic Park movie with tiny bellboy hats on top of their heads. The robotic Dino Check-in process will involve a tablet system which will allow the guests to choose a language according to their preference – Japanese, Chinese or Korean that they want to use to communicate with the multilingual robots.

Not only this, the hotel lobby also features an aquarium that has a battery operated fish swimming in it with electric lights in their articulated bodies flickering on and off. Even the rooms are staffed with mini-robots that look like spherical Star Wars droid BB-8 that help guests with amenities in the room like changing channels to playing music and more.

The first Henn na Hotel opened in the year 2015 and was certified as the following year by Guinness World Records as the world’s first hotel with robots as its staff. Not too high on robotic-service? Fret not, as they have humans intervening as well in case of any glitches in regards to hotel services.

Also read: Did You Know There’s A Hotel For Corpses In Japan?