A Night On The Infamous Chudail Trail Of Jaisalmer 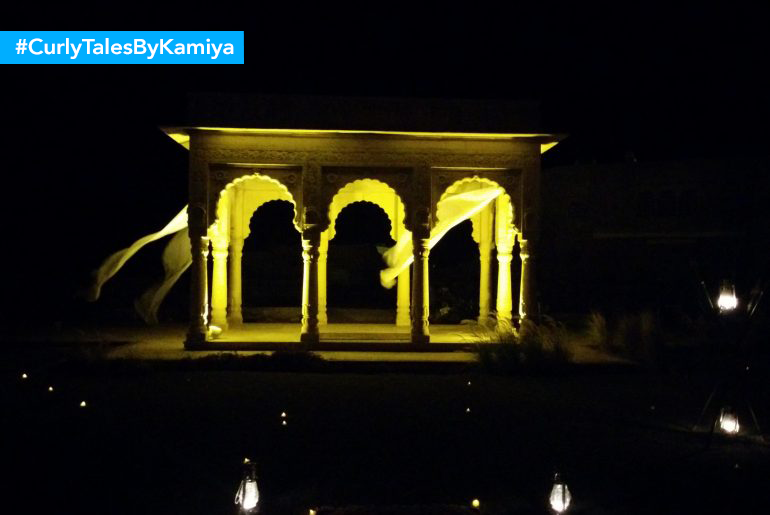 In a bid for some time off and to write my own little tale, I set off on a journey to the magical land of Jaisalmer in Rajasthan. Little did I know I would experience the spooky chudail trail in this golden city.

I checked into the beautiful 40 acre Suryagarh property. One look at the place and you feel like you’ve stepped back in time to a land of old forts and mystical trade routes.  This boutique hotel resounds the vibe of Rajasthan without the aggressive tourism. While exploring the desert city, our tour guide took us to an old fort and pointed towards an abandoned town of Jaiselmer, Kuldhara. He also made a passing mention of the witches who still reside in this neighbourhood and that’s why no living person wants to share the same space. I felt instantly intrigued by the eons of mysteries and untold tales of Jaiselmer. Dining Under The Stars

After an exhausting day, we came back to our palace. Jaiselmer is also a place that knows how to treat its guests like royalty. From Halwai breakfasts of kachori, gulab jamuns, samosa and chaat with peacocks in the backdrop to curated itineraries, it’s all you can hope for. This evening, a lavish dinner under the stars was set up by the very hospitable team of Suryagarh. The Thar Desert is clearly a vast expanse of unsympathetic and romantic beauty. I approached Karan Singh, the charismatic General Manager of the hotel to find out a little more about the place and also, for some nightlife. Mr. Singh suggested the perfect nightlife – albeit of a different kind. That’s how I heard about the infamous Chudail Trail.

There have always been plenty of stories floating around Jaiselmer about old ghost towns and haunted places so I was just a little apprehensive about the authenticity of the Chudail trail. Nonetheless, I was more than a little tempted. My friend, who was also on the trip with me, categorically refused to be a part of anything that involved ‘dark magic’. And so it was. The driver and I set out on the Chudail trail at around 12 in the night. I couldn’t help but feel a tingle of anticipation. Here are some of the things you must know as you traverse the Chudail Trail.

Its dark – really, really dark. It’s also eerily silent, except for the steady humming of the jeep. The headlights of the jeep are the only things that cut through the darkness – that, and a canopy of stars twinkling in the night sky. The Tale Of The Haunting

As we made our way through Kuldara, I was told of the sad story surrounding the haunting. A young girl caught the fancy of the right hand of the king. He informed the father that he was coming the next morning itself to marry the girl. In an attempt to save the girl from marrying out of her caste, he burned his daughter alive in the house. 84 villages left that night itself to save themselves from the wrath of the king. Where they went? No one knows! All that is known is that the girl continues to stay there and haunt the village to this day. I have to admit, the story did spook me out a little and my friend’s warnings did come back to ‘haunt’ me just a little bit. But I decided to carry on anyway and explore the Chudail Trail. We walked into the house with flashlights and true enough, everything was as it is. A bullock cart lies in one of the rooms, the mud walls are filled with cobwebs and the house looks like it was left hastily. Unfortunately, I didn’t feel  any supernatural presence but the eerie silence was getting me a little uncomfortable. Although I was told that one foreign guest sensed unrest in the house and someone spoke to him asking him to leave instantly. He had a high fever the next day and was sent to the city for treatment. The trail take me about an hour and I have to admit – I was scared enough to want to run back to my room. I was hoping not to catch a glimpse of a wandering soul or even feel its presence. And thankfully, nothing happened. Though the locals claim that they have personally witnessed many such paranormal experiences.

The story is about 600 years old and has been passed on from one generation to the next. The fact remains that one fateful night, all 84 villages belonging to the Paliwal community had to be emptied. The brick houses along with the remains still exist. All abandoned and no one dares to touch anything.
It is certainly an experience worth trying! Do you have a scary tale to tell? Share it with me in comments below.