A Rickshaw Puller From Kolkata Pedaled His Way To Ladakh 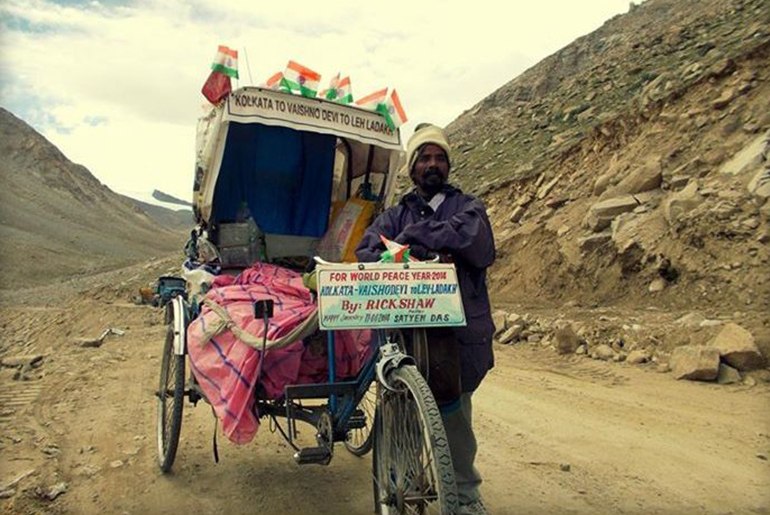 Satyen Das, 44, became a legend after he pedaled his way through 3,000 km and reached the Ladakh valley.

Satyen Das, a mere rickshaw-puller from Kolkata pedaled for 68 days and reached Ladakh Valley after going through Jharkhand, Uttar Pradesh, Srinagar and Kargil. It was estimated that he pulled the rickshaw for nearly 3000 km and over an altitude of 5000 meters. He’s returned home a while ago and is now a contender for receiving a Guinness Record for pulling a rickshaw at such a height!

His entire trip was financed by Naktala Agrani Club of Kolkata. The members of the club raised ₹80,000 for the trip and they were impressed by his determination.

Also read: Did You Know The Story Behind Gurudwara Pathar Sahib In Ladakh? A documentary filmmaker also accompanied Satyen on the journey to document it. But this isn’t the first time Satyen has made a journey like this. Way back in 2008, he reached the famous Rohtang Pass in Himachal Pradesh in a rickshaw with his wife and daughter.

On this journey, he pedaled nearly 40-50 km everyday while crossing through hills, forest and the endless beauty of the Himalayas. During the nights, he stayed at Gurudwaras or temples, but if he couldn’t find anything, he would even sleep under the open sky.

Also read: Your 5-Day Itinerary For Ladakh Is Ready