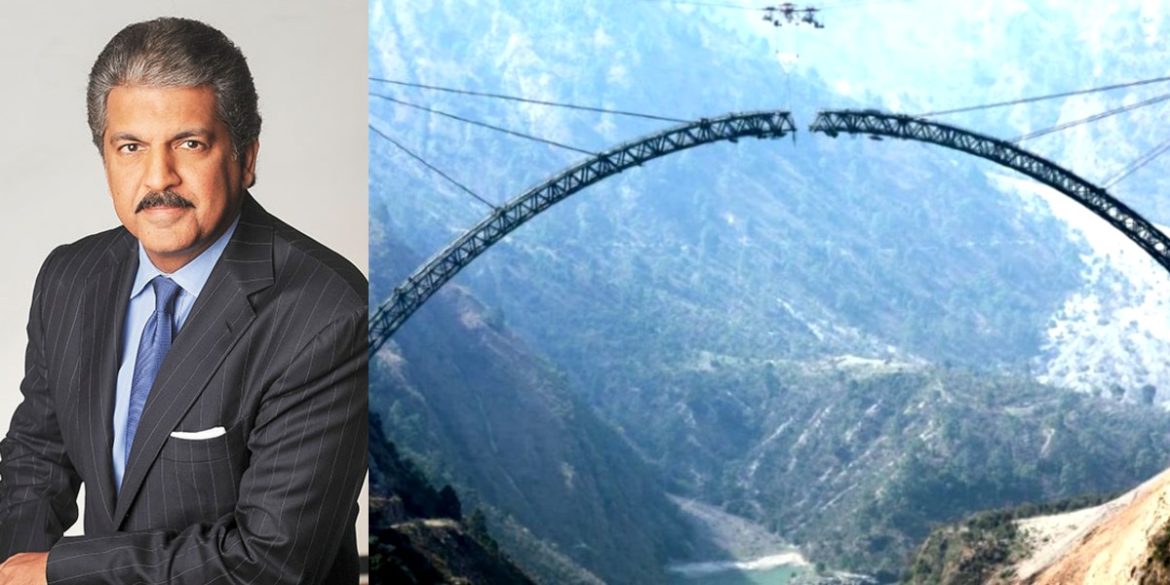 Recently, Jammu and Kashmir took the internet by storm when the Railway minister shared images about the world’s highest railway bridge in Chenab. Even Anand Mahindra, Chairman of Mahindra & Mahindra Group, shared a short video on Twitter about the world’s highest railway bridge in Jammu & Kashmir. He also shared that visiting this bridge will be included in his bucket list for the year 2022-2023. Apart from this spectacle, Anand Mahindra’s bucket list also includes visiting Ladakh. Let’s find out more!

Anand Mahindra shared a short video on Twitter about the world’s highest railway bridge in Jammu and Kashmir. While thanking India’s engineers, he also mentioned that he will add this place to his bucket list for ’22-’23. This tweet has garnered more than 7500 likes while more than 100 comments on Twitter. Anand Mahindra has frequently been sharing posts that at times have been inspirational and sometimes funny! This bridge constructed by the Indian Railways will be 30m higher than the Eiffel Tower in Paris, France. Isn’t it cool? This engineering marvel will soon connect the country’s remotest parts in the union territory of Jammu and Kashmir with the mainland.

A salute to our engineers. Added to my bucket list in ‘22-‘23. But I suspect there will be a waiting list for tourists who just want to check it out. 👏👏👏 pic.twitter.com/4cn24Ue9Xn

He Also Wants to Visit Ladakh

Built over the Chenab river, this bridge will be the lifeline that will join the Kashmir Valley with India’s rest. This bridge forms the crucial link in the 111-km stretch between Katra and Banihal, which is part of the Udhampur- Srinagar-Baramulla section of the Kashmir Railway project. This bridge is constructed on the Katra-Banihal railway line in the Reasi district. The bridge is reported to be 1.3-kilometer-long in length. Around 1,400 men, 500 of whom are locals, are working through the day to complete the structure. Apart from this Anand Mahindra also wishes to visit Ladakh for a vacation and meet his grandchildren as part of his travel bucket list.

Also Read: Ladakh Is Gradually Dying But We Can Still Save It Live Mint has reported that Indian Railways is also planning to start bungee jumping and other adrenaline-driven sports events at the bridge. With more sightseeing points, trekking routes, and hotels, this destination will soon be a favourite among Indians and foreigners. If this glorious bridge and Ladakh are part of your bucket list too, then here’s a video of Ladakh to get you going.