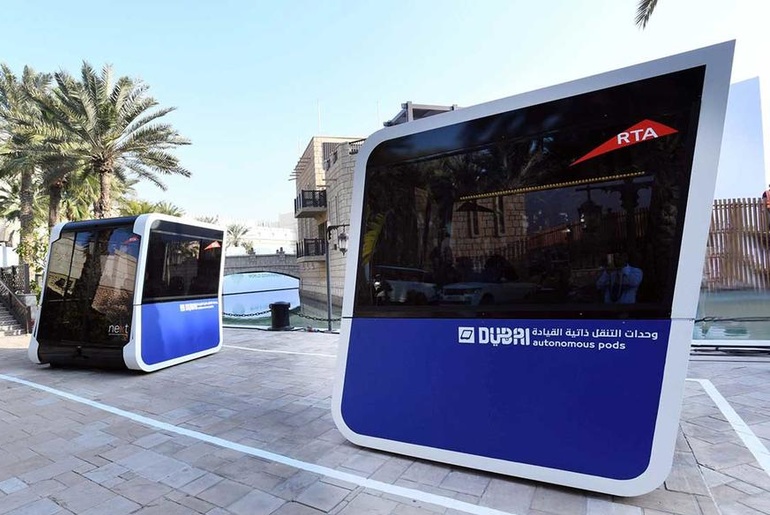 During the World Government Summit on February 11, 2018, the Roads and Transport Authority of Dubai launched the test of the world’s first ‘Autonomous Pods’ designed and made in collaboration with NEXT Future Transportation Inc.

These pods are a part of Dubai’s largest strategy of making 25% of public transport journeys to be driverless by 2030.They are also a part of RTA’s endeavours to carry out tests on autonomous transport means keeping in mind Dubai’s extreme climatic conditions. These autonomous pods have been developed as a part of the initial phase of Dubai Future Accelerators. With the aim of transforming Dubai into the smartest city worldwide, the pilot test was directed by His Highness Sheikh Mohammed bin Rashid Al Maktoum, Vice-President and Prime Minister of the UAE and Ruler of Dubai.

These Autonomous pods are designed to travel short to medium distances in dedicated lanes. They have the facility to be coupled together with other pods in less than 15 seconds and can be detached with equal ease. Cameras and electromechanical technologies fitted in each pod helps with the coupling and detaching, which can even be activated while the pod is in motion. Each pod can accommodate 6 sitting passengers and 4 standing passengers, with leeway to walk freely in coupled pods. The pods come with 3 protection systems to avoid crashes and are embedded with a battery that can be charged fully in 6 hours and supports 3 hours of hassle-free operation. They are designed to weight 1500 kilograms, measuring 2.87 meters in length, 2.24 meters in width,  2.82 meters in height and travels with an average speed of 20 kmph. The pods are equipped with complimentary wifi as well.

A launch date for Dubai’s autonomous pods has not yet been confirmed.