Desi Cops Take On Quirky…
KFC, Pizza Hut In UAE…
Hrithik Roshan Goes For A…
Jacqueline Fernandez: I Make My…

Desi Cops Take On Quirky Measures To Promote Awareness About COVID-19 & They’ve Got Our Attention! 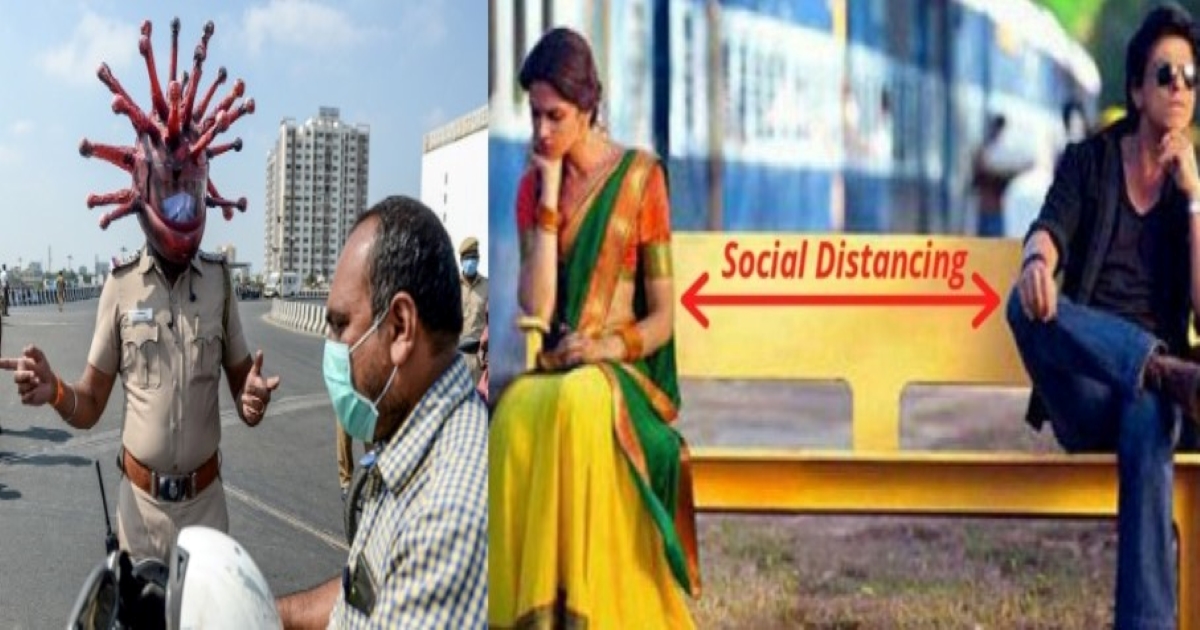 To communicate something serious with a strong impact, the power of humour is exceptional. It can draw the attention of even the most oblivious of the audiences. No wonder, police officers across various states of India are finding funny and quirky ways to spread awareness against the deadly coronavirus. From music and witty memes to drama and dance performances, they are utilizing their creative juices to the fullest to disseminate the most important message or the hour. We’ve found out 8 such eye-catching initiatives by the state police authorities that got our heads turning. Read on!

“Don’t underestimate the power of a common man!” Every SRK fan is accustomed to this dialogue from Rohit Shetty’s popular movie Chennai Express. So, the Nagpur police picked up the line, and simply replaced common man with ‘social distancing’.

In another tweet, the police authority posted a black house with the quote, “Look inside the house to see who is Safe”. On magnifying the picture, one will see his own reflection inside the house.

The person you see inside is the Safest?

Inspector Rajesh Babu of Chennai got a helmet created by a local artist that resembles the shape of coronavirus. The policemen on duty had been confronting bikers on road, wearing the thorny helmet. They were transferring the helmet on the rider’s head, to depict how the virus spreads.

Police personnel in Dhone town of Andhra’s Kurnool district counted on theatre to create awareness. They hired local artists and made them dress as Yamraj, Chitragupta and coronavirus who went around the streets demonstrating the virus effect. In the video, Yamraj is telling people, “If your karma is bad, come to the roads and if you want to be happy stay inside the house.”

In Bilaspur, cops on the streets are shaming the violators with a literal aarti with tikka, flowers and diya, to prevent them from stepping out. The constables had initially tried to make people stay at home by scaring or explaining them. When nothing worked, they took up this out-of-the-box initiative. As SP Bilaspur Prashant Agarwal stated, they ‘got just the right reaction’ to it. He added, “People were embarrassed, they accepted their mistake”.

Mumbai police made a very witty tweet that went viral in no time. They threw up a horoscope for the week with the caption “For once (and only once), the stars may definitely favour you if you follow these predictions!”. Check out the post below to see how it turned out awesome.

For once (and only once), the stars may definitely favour you if you follow these predictions! #HomeIsTheStar #FightCorona #TakingOnCorona #coronavirus pic.twitter.com/YmCR1Rnz0Q

Or Potterheads, have a look at this one:

A lot more than just 5 points will be awarded to all those who stay home during #lockdown and don’t create panic.#DumbledoreSaysShutTheDoor #TakingOnCorona pic.twitter.com/9Gp6WZnc3E

Bela Bose is a cult song among the Bengalis, and its catch-phrase ‘ eta ki 2441139’ ( is this 2441139) will instantly catch the attention of every bong millennial, especially the ones who belong to the 90s era. So, the Kolkata police turned it into a tool to promote awareness by simply changing the lyrics and the phone number.

An initiative by Gariahat PS to cheer up the citizens in times of crisis alongwith spreading awareness. #FightCoronaTogether #StayHomeStaySafe #WeCareWeDare @KolkataPolice pic.twitter.com/0kgIqoZbON

A track named Kalakkatha from the Malayalam movie Ayyapanum Koshiyum is a viral hit in Kerala. The Kerala police picked up the song to make an inspirational dance video. In the video, they all danced together urging the people to wash their hands.

Punjab police sub-inspector Baljinder Singh released a music video to communicate the precautionary measures in a melodious way. Through the bhangra pop music, Singh asks the city people to protect their family members, use masks and sanitizers. This beautiful song has been composed by Assistant Sub-Inspector Partap Paras.

A song on precautions against Coronavirus by SI Baljinder Singh of @PunjabPoliceIndia. A creative way of spreading awareness on #COVIDー19. pic.twitter.com/Qvbc9bMWo1

Also Read: Pyramids To Burj Khalifa: Here’s How The World Came Together In The Fight Against Covid 19

These are only a few of the long list of creative efforts that the police forces have taken up to make people follow the lockdown guidelines. Amid the calamity, they are taking all the risk and putting their best to ensure the safety of the citizens. Huge respect to all of them for their selfless efforts!