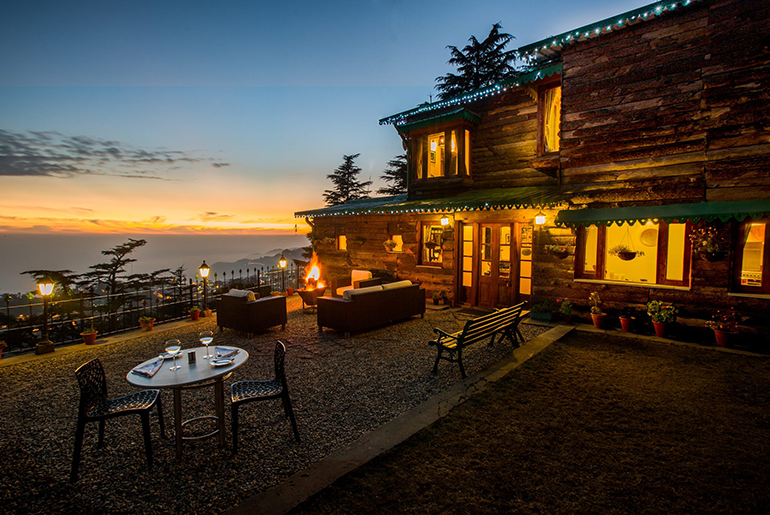 Stay at Landour’s Rokeby Manor for a luxurious insight into Mussorie of 19th Century India.

Rokeby is a one and a half century-old mansion built on a ridge in Landour, Mussorie. It is a ‘country estate hotel’. Located far from the commercial crush of Mussoorie, it has its own beautifully manicured grounds. It passed through many hands before being restored to its original glory. Rokeby is now a boutique hotel run by hospitality legend Sanjay Narang. According to testimonials, Sachin Tendulkar visits and stays here every year, and Ruskin Bond thinks it’s a great place to meet old friends.

Also read: Staying At An Eco Luxe Hotel In Coorg, The IBNII Rokeby is named after a castle in Britain, where battles were fought about which poems were written. It was owned by Frederick ‘Pahari’ Wilson, a runaway British soldier who eventually ruled over his own principality in the Himalayas. The café at Rokeby is named after writer Emily Eden, the governor-general’s sister who wrote many memoirs in Landour.

The stone walls, working fireplaces and wood floors of Rokeby will take you back to Victorian England. Every room or suite is different and has its own name: Rose Room, Rhododendrom Room… and is tastefully furnished according to its unique theme. Some rooms offer a glorious view of the Doon Valley far below, others of the snow-capped Himalayas.

Also read: Your 5-Day Itinerary For Ladakh Is Ready Go for a walk in the pine and oak forest nearby.  Hire a mountain bike to get your adrenaline going. Sip on a cuppa in the Tea Garden. Browse through the floor-to-ceiling bookshelf in Wilson’s Chamber. Watch the sunset from a Jacuzzi. Savour shepherd’s pie or ratatouille at Emily’s Café. Ask for a bonfire in the winter.

Landour is home to living legends of literature: Bill Aitken, Stephen Alter, Ganesh Saili and Ruskin Bond. It is close to Char Dukaan, the social hub of Landour. If you’re lucky, you might even bump into one of the writers here! Winter is coming (or not); a stay at Rokeby is pleasant all year round!