Celebrate Lath Mar Holi, An…
This Kerala Woman Rebuilt Her…
Tourist’s “Zabardast” Reaction To Snow…
You Can Now Walk Or… 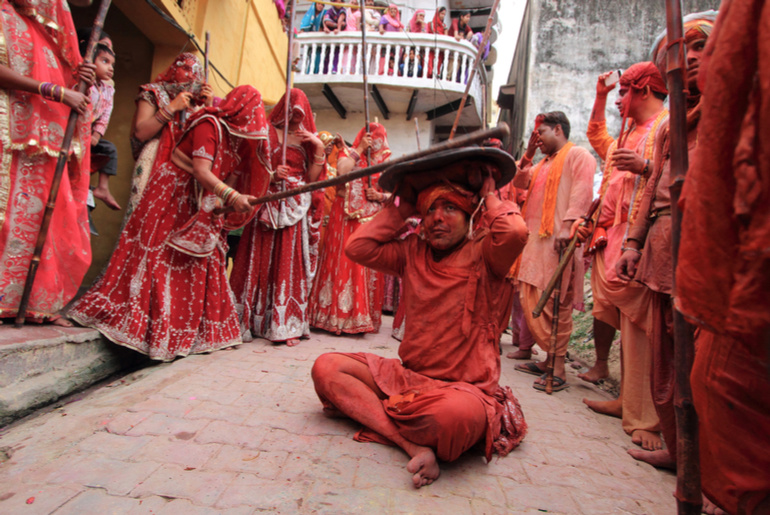 A much celebrated festival in India’s diverse culture is Lath Mar Holi where women beat up men with sticks as part of the tradition.

A century-old festival which is locally celebrated by the Hindus, Lath Mar Holi is a celebration of Holi where sticks are used by the local women to beat up men. The festival takes place before the actual celebration of Holi in the small towns of Barsana and Nandgaon in the state of Uttar Pradesh.

Also read: Celebrate Holi In Pushkar This Year, India’s Safest & One Of The Biggest Holi Celebration Amongst several other festivals to visit and see in India, Lath Mar Holi is one festival which shouldn’t be missed for sure.

Legend has it that Lord Krishna visited his beloved Radha’s village on this day and playfully teased her, taking offense on this, the women of Barsana chased the lord away. Keeping this story alive, the men from Nandgaon visit the town of Barsana every year and are chased away by the women waiting with the sticks. The celebration starts with women smearing colour on the men during which villagers sing folk songs and dance on the first day. Followed by the next day preparations where shopkeepers keep a cold drink (thandai) ready. The men then visit the village again, only this time to be beaten up by the sticks. Some unfortunate men aren’t able to escape the bashing and are then made to sing and dance in front of everyone. All of this is done keeping fun and faith in mind.