India now has its longest motorable suspension bridge in Uttarakhand, over the Tehri Lake. So, travel enthusiasts, you have one more tourist spot to visit in Uttarakhand, the next time you step foot into this hilly state. Uttarakhand Chief Minister Trivendra Singh Rawat inaugurated the 725-metre long Dobra-Chanti suspension bridge on November 8. This bridge which took 14 years for its construction cost ₹2.95 crores for its construction. Read on to know more.

Uttarakhand now has the longest single-lane motorable suspension bridge in India, built over the Tehri Lake. Known as the Dobra-Chanti suspension bridge, this is 725m long. Chief Minister Trivendra Singh Rawat inaugurated this bridge amid cabinet ministers Subodh Uniyal, Dhan Singh Rawat and other officials. Uttarakhand government opened this bridge for the public on November 8. The Dobra-Chanti suspension bridge shall help connect Tehri Garhwal district headquarters and the Pratap Nagar town. It shall cut travel time between Tehri and Pratap Nagar from 5 hours to just 1.5 hours.

It took 14 long years to construct this bridge over the Tehri Lake. And it cost ₹2.95 crore. Rawat sated to Hindustan Times “The inauguration of the bridge is a significant and historic moment for the state. It will not only connect the people of Pratap Nagar town with the district headquarters but will also open avenues for development. The bridge over the Tehri lake also reminds us of the sacrifices the people of old Tehri Garhwal made to pave the way for the Tehri dam project. Today, we are extremely proud that the project is not only important for the state but the whole country. It will be providing power as well as water for irrigation.” 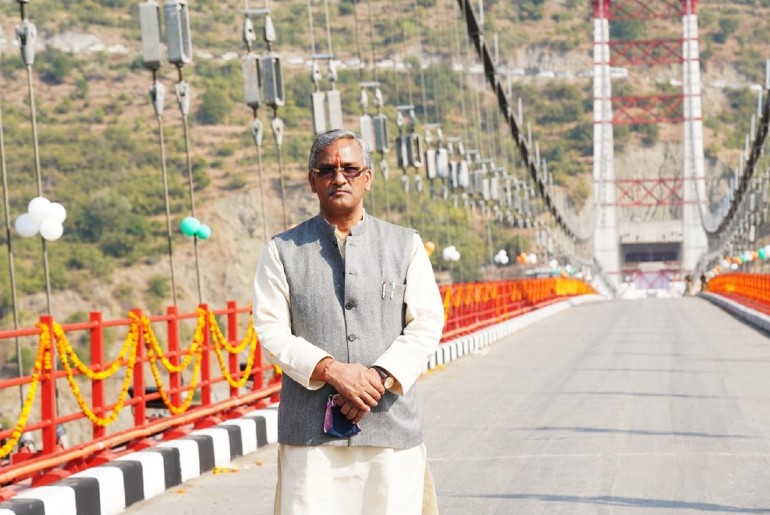 Chief Minister Trivendra Singh Rawat also called the Tehri Lake a significant tourist destination. He vouched that this lake and the new bridge will attract many travellers in the near future. While the construction of this bridge started in 2006 and was supposed to undergo completion by 2008, it witnessed many obstacles along the way. This includes failure of design and lack of budget.  Now that it’s finally complete, many people can reach the headquarters of Tehri conveniently. For now, virtually visit Uttarakhand’s Jim Corbett National Park through this video below.