Part of Navi Mumbai’s Talawe Wetland Turns Into A Gorgeous Shade Of Pink! 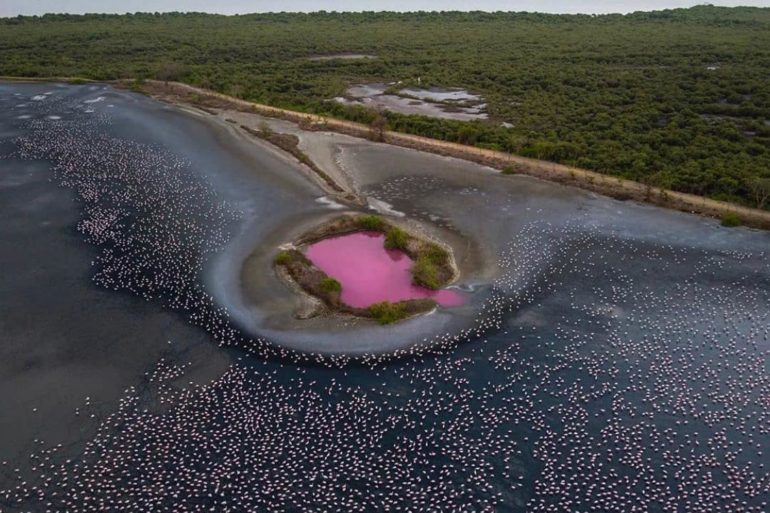 First it was the thousands of lesser flamingoes that painted the Talawe wetland pink with their sheer flamboyance and beauty.

Now, the water in part of the wetland has taken a spectacular shade of deep pink! And it is a sight to behold!

According to a Hindustan Times report, a small part of the wetland, located towards the south-eastern end has turned pink in colour, taking many by surprise.

The Bombay Natural History Society (BNHS) has called it a rare and first-of-its-kind occurrence for Mumbai Metropolitan Region. As per Deepak Apte, Director of BNHS, researchers of BNHS have never witnessed something like this along Mumbai’s creeks.

However, most researchers and microbiologists attribute this pink coloration due to an algal bloom, caused by the blooming of a large number of red algae that thrive in the saline water of this wetland. The soaring hot and humid temperatures along with increased evaporation and salinity have also added to the conditions, thereby turning part of the wetland into a pink spectacle.

But do you know these algae are also responsible for giving flamingoes their stunning bright pinkish-red feathers? Well, according to a BNHS official, these algae and bacteria produce carotenoids (a reddish-orangish pigment), which are consumed by these flamingoes, thereby giving them those striking pinkish feathers when they mature from juveniles to adults. Isn’t that so cool!

A flamboyance of pink flamingos seen in Navi Mumbai by Raashi Jain, a fellow resident ? Amidst COVID-19 outbreak, Curly Tales encourages you to stay indoors. We take you around the world from the comfort of your home. #SpreadPositivity #ArmchairTravel . . . . . . . #flamingos #mumbai #navimumbai #flamingo #wildanimals #animaltakeover #lockdown #animal #covid19 #indialockdown #takeover.

Such Phenomena Happen Around The World

While BNHS says it is a rare phenomenon for Mumbai, many residents and environmentalists argue that this happened last year as well.

Such phenomena, however, have been observed regularly in many parts of India too. As per Sunjoy Monga, an ornithologist and naturalist, a similar pinkish hue was witnessed at a flamingo habitat in Porbandar in 2007. Even a portion of the Chilika Lake in Odisha and the wetlands of Thoothukudi in Tamil Nadu have observed this phenomenon.

Around the world such examples have been observed at Edgar’s Creek in Australia, Cameron Falls in Waterton Lakes National Park, Canada as well as the Dead Sea.

For Mumbai, however, this seems to be rare breathtaking site? Don’t you think so!

Also Read: Flamboyance Of Pink Flamingos Seen In Navi Mumbai, Residents Demand Area To Be Made Into A Sanctuary