This Solo Traveller Has Given Us Serious #AdventureGoals 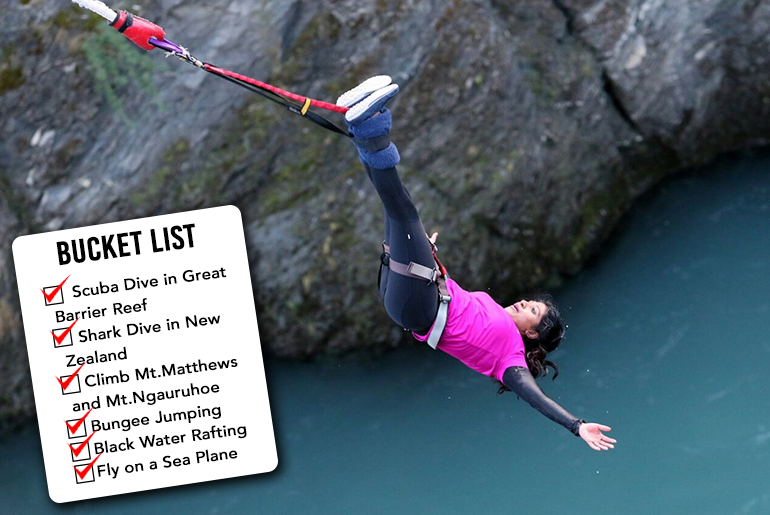 Based out of New Zealand, Preeti Pillai is a Business Analyst by profession but an adventure junkie at heart. At work, she is supposed to look at businesses, opportunities for improvement, projects and IT products but that doesn’t mean that she has left the mountains, sea, nature or the adventurer far away.

In short, she is one bad ass traveller with so much on her bucket list cut off already that I envy her. Be it diving 16 meters under the sea to meet the sharks or tramping 960 meters above sea level to see the sunrise, Preeti wishes to see everything nature has to offer. We tell you about the things she has already knocked off her bucket list.

Her first attempt in of diving with the sharks in the year 2015 at Invercargill (off Stewart island) in New Zealand had failed. She did not have an encounter with a Sea Tiger. Being assured of the 100% safety record, Preeti dived again in 2016 and got lucky. I saw the Shark coming towards the cage and to my respite, it soon took a U-turn. It was surreal and at the same time a bit intimidating to see the sharks. They are not as scary as they are shown in Jaws or Shark Night. Though I could not stop thinking about it for the next 2 to 3 days.” She was 13, when she came to know that the Great Barrier Reef existed and decided that she wanted to see and experience the vastness of the ocean. This dream came true last year in 2016.

In the Inner Reef, the corals were juvenile and young but had a lot of colours. I took 2 dives with a break of 1 hr in between and went as deep as 16 mtrs. She was disappointed that she could not go to the main reef, so the next day she booked again. This time, she finally did go to the outer reef and told us,

Corals in the outer reef were hard and less colourful. They were huge, almost 2 storied and it was an incredible sight. Quite abundant to see. One of the corals in the Outer Reef

Preeti has also scaled the heights of Mount Ngauruhoe in New Zealand. 960 meters above sea level, the mountain is an active stratovolcano made from layers of lava and tephra. She also finished her tramp on Mount Matthew which is again the highest peak in the Wellington region of New Zealand. 4. Flying On A Sea Plane

On the last day in Hamilton Island, Preeti decided to fly on a sea-plane.

It was an exhilarating experience. Flying over the sea and landing on the water is something everyone must try atleast once.

Easter weekend of the year 2015 was certainly one of the most enticing weekends for Preeti as she went Black Water Rafting into the stunning underworld of Ruakuri Cave, New Zealand.

The most thrilling part of the entire experience was that we could not see what was in front of us. It was pitch dark. Follow instructions and trust the instructors & guides. It just makes any adventure even more safe and fun.

Be organised and save up a lot by booking well in advance.

Little things don’t matter as much and there is so much more to life. Looking at the bigger picture we are just tiny dots. After the Bungee Jump

We’ve given you enough #AdventureGoals already. Also, you can get features too just mail to us your story at hey@curlytales.com.