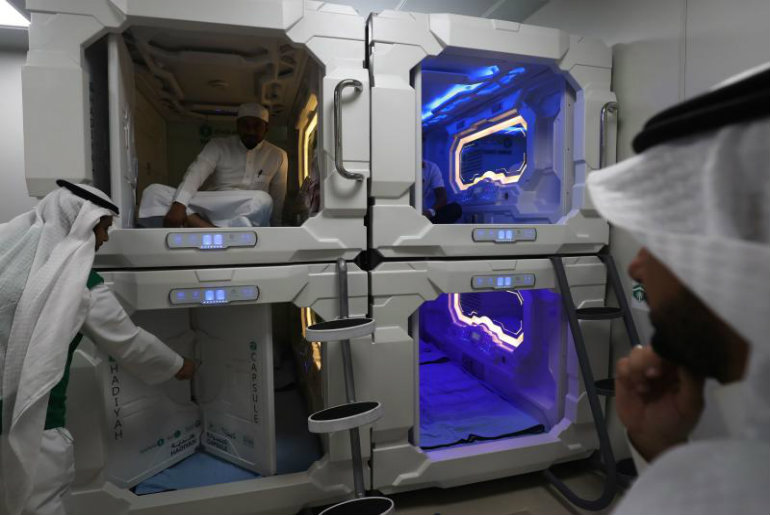 Saudi Arabia has plans to introduce free sleeping pods soon in the western city of Mina, as an estimated 2 million pilgrims gather for Haj.

The nap pods provide a solution for pilgrims who cannot afford to book hotels on site but need a quick rest during Haj. Free nap pods are about to be introduced this year & the government has also introduced apps for on-the-spot translation and emergency medical care. The sleeping pods are made of fiberglass & each is less than three meters long and just over one meter high. It includes a mattress, clean sheets, air conditioning and a large, well-lit mirror. The pods can be lined up horizontally or stacked vertically to save on space & each napper will have 3 hours of access. The pods are imported from Japan at cost of around $1,114 (AED 4,092) each. When the pilgrim wakes for prayer time which is five times daily in Islam, workers will sterilize the pod before handing it over to the next pilgrim.  It is estimated that 60 people used each pod every day during the holy fasting month of Ramadan on a trial run. Saudi authorities are pushing a “smart Haj” initiative to meet with the growing demands of Haj, which coincide with the kingdom’s drive to modernization. Take A Dip In This Healing Hot Spring...

Planning To Visit Venice? You Will Have To...