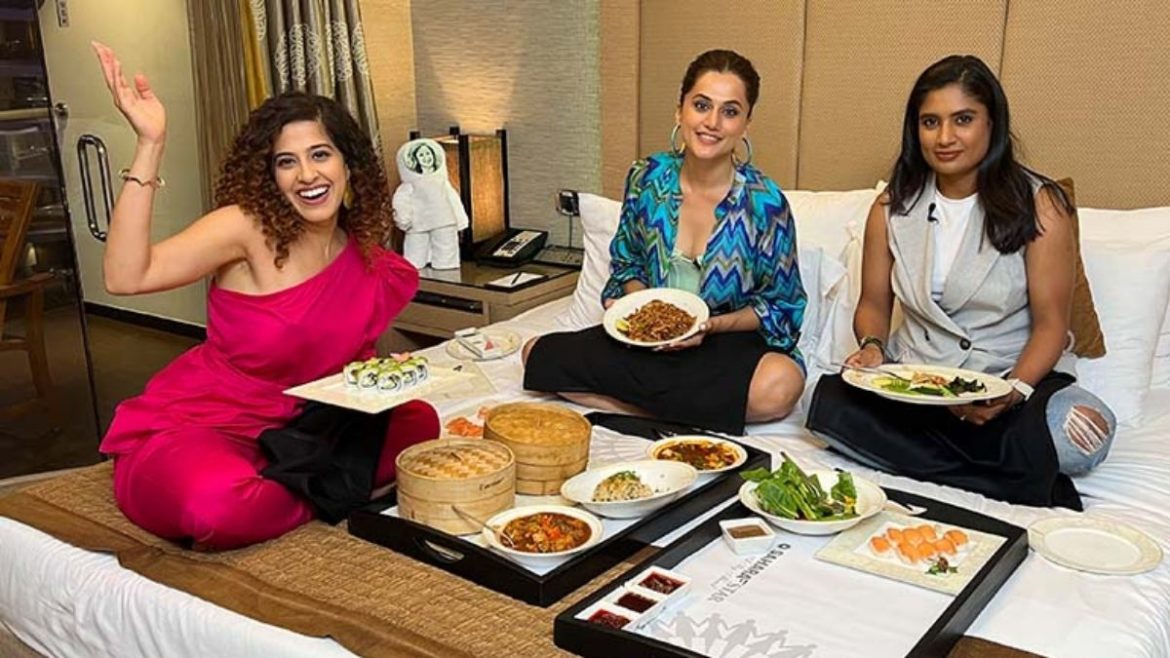 Bollywood and Cricket have been connected for generations now. Be it Bollywood celebrities getting married to cricketers or celebrities buying teams in IPL or biopics being made on cricketers, Bollywood and cricket simply connect. Our Chief travelling officer Kamiya Jani met Taapsee Pannu and Mithali Raj on Sunday Brunch with Zomato as they gear up for Shabbash Mithu, on a staycation which was filled with loads of gossip, confessions and food.

Taapsee’s Friends Have Blacklisted Her From Parties

Thinking about any Bollywood celebrity, after fame what comes to your mind is probably late-night parties. Well, not all celebrities do that. Kamiya while interviewing Taapsee and Mithali on Sunday Brunch with Zomato asked Taapsee about her dinner time to which she replied that she eats at 7 in the evening and sleeps by 10 at night. She said that because since childhood she slept by 10 in the night, she never had the habit of going on night outs with friends. She confessed that she cannot even today go for night-outs and that her friends have blacklisted her off night-outs or late-night parties. She further explained that she is a totally boring person after 10 pm to ever hang out with as she is one of those people whom you would find yawning at a night party instead of dancing there.

Also Read: This Is The Most Favourite Meal Of Taapsee Pannu

In the fun episode of Sunday Brunch with Zomato, there was a fun game segment named honest confessions where the two had to answer some questions leading to confessions. Kamiya asked Taapsee and Mithali if they had ever been hit by a co-star or a girl of the same gender. Taapsee narrated an incident from a vacation in Goa with her friends in response to the question. Taapsee didn’t realize she was being hit on by a girl until her friends told her. while Mithali spoke about her co-teammates appreciating her.