The Umaid Bhawan Palace In Jodhpur Is Meant For The Royal Within You! 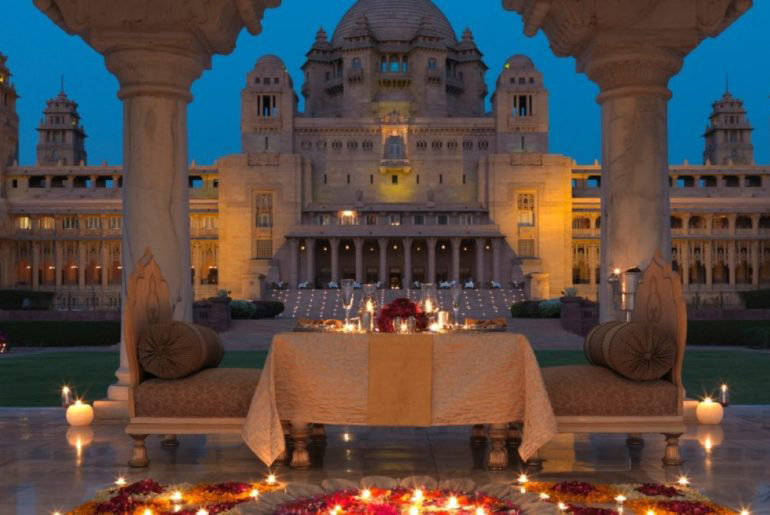 Named after Maharaja Umaid Singh, grandfather of India’s most renowned royal, Gaj Singh, the Rajasthani palace was intended to replace Mehrangarh Fort as a symbol of a new Jodhpur.

The magnificent Umaid Bhavan in Jodhpur is a 347-room palace and is the last Royal Palace built in India before Independence. Built on sprawling 26 acres, the palace was divided into a home for Gaj Singh and his family, and a heritage hotel of 64 rooms and suites run by the luxury hotel chain Taj Group since 2005. The regal hotel is literally fit for an Indian king, as the sprawling property is the chief residence of the Jodhpur royal family even today.

The exteriors of the Taj Umaid Bhawan palace exude an old-world charm and there’s nothing like a royal touch for bringing in visitors. The first thing that strikes you about the interiors of the Umaid Bhavan is the abundance of colour used throughout the heritage hotel. The interiors are a blend of eastern and western architectural styles, where traditional meets contemporary design.

Perched high above the desert city of Jodhpur, the Umaid Bhawan Palace is a true royal experience with a fascinating view of the ‘Blue City’. Maharaja Gaj Singh, was only four when his father died in a plane crash in 1952, making him sole owner of the palace including the ancestral Mehrangarh Fort.

The family opened part of the palace as a hotel in 1978, and turned the fort into a museum, opening the gates of this glorious fortress and giving us a glimpse into Jodhpur’s royal antiquities.

If you’d like to stay at the Umaid Bhavan palace on your upcoming trip in Rajasthan, don’t forget the Taj group of hotels is known for their first-class hospitality and their royal treatment of guests.

Also Read: Here Are Top 5 Things To Do In Jodhpur Did you know, in 2007, British actress Elizabeth Hurley married Indian businessman Arun Nayar beneath the white canopy, or baradari, on the palace lawn? This palace-turned-hotel is a fantasy of lights for extravagant celebrity weddings.

Embrace the royal within you as you are welcomed by a beaming guard wearing one of Jodhpur’s famous handlebar moustaches; and if that is not a royal entrance enough, the hotel staff further showers guests with rose petals.

As you walk inside, effervescent Rajasthani folk jingles fill the air as colourful dancers move in choreographed circles. Guests blend amid crystal chandeliers and silk-draped furniture.

Now isn’t this straight out of a fairy tale novel?

Also Read: Dine At This Rooftop Restaurant In Jodhpur With Some Breathtaking Views Of The City This elegant hotel houses majestic rooms and suites with free Wi-Fi and minibars. Besides room service, try the international restaurant which includes a bar and a BBQ eatery. This plush property offers indoor as well as outdoor pools and for those of you who would love a spa day, there are Ayurvedic treatments, in-room massage and yoga too.