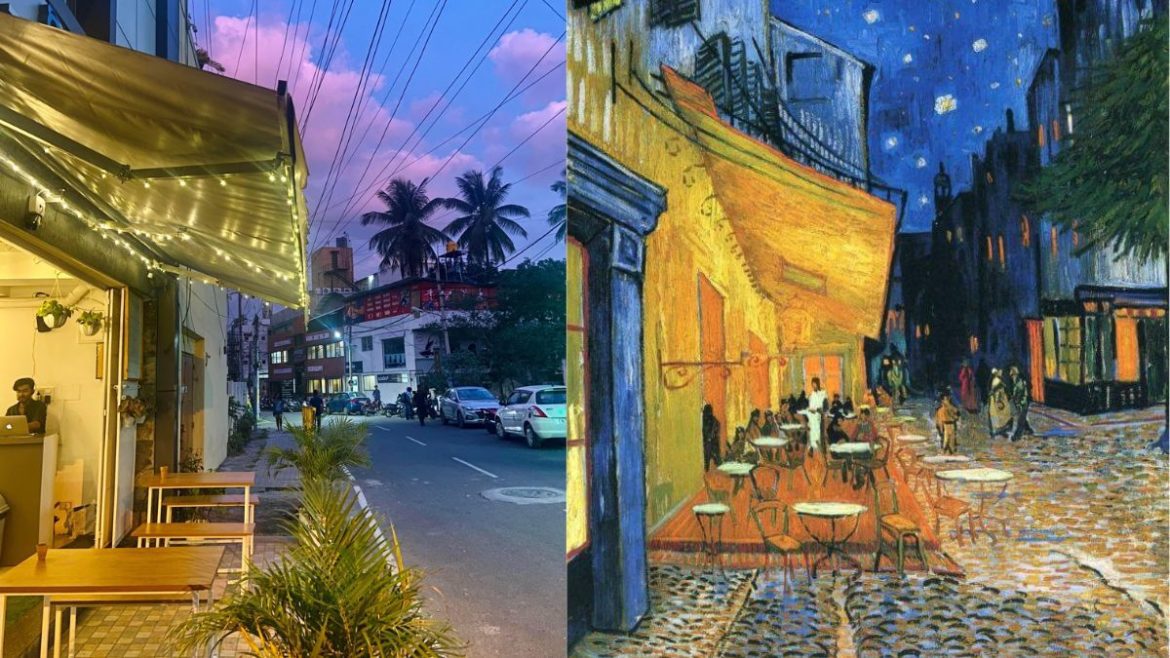 The Internet is truly an interesting place. Whatever surprising and surreal things happen in different corners of the world, we get to know about them with only a click on our mobile phones. Now, a photo of a Bengaluru cafe with an uncanny resemblance to ‘Café Terrace at Night’ by Vincent Van Gogh is getting viral on social media. The cafe’s photo shared by an unnamed Reddit user is making rounds on various social media platforms.

An unnamed Reddit user posted this picture of this Bangalore cafe which later went viral on Twitter. The cafe is in Koramangala, Bengaluru. Social media users with very curious eyes easily identified the cafe’s resemblance with the artistic wonder of Van Gogh’s most iconic oil painting created in September 1888. Many Netizens took very little time to identify the similarities whereas the others were amazed to notice the photograph later.

A Twitter user stated, “I know this place! It is exactly opposite to the @iRepairindia Centre in Koramangala.”

The famous picture is about the terrace of a coffee house and the darkness of the rue du Palais in the background. It is indeed one of the most remarkable artworks by Van Gogh and people’s love and admiration for this masterpiece is making the similar photo of the Bengaluru cafe viral. A Twitter user named Sai Preetham M shared the Reddit screenshot on his profile.

A reddit user clicked a photo of a cafe in Koramangala which resembles the famous painting “Café Terrace at Night”, 1888 by Vincent Van Gogh@peakbengaluru pic.twitter.com/sxDKrgpFRA

While many social media users are immensely amused by this image and awestruck by how the cafe’s design and layout resemble Van Gogh’s painting, others did not agree much with this comparison. Here are some reactions from Twitter users.

Also read: This Cafe In Bengaluru Is A Mini Replica Of Santorini

MY god ! Why they sensitise Bangalore this much. You seen van gogh art

Nope. But sure, posting some random content is peak bengaluru. https://t.co/0QU82JypZu

Bangalore is the Paris of the East 😋 https://t.co/yUxplnCKAw

Now that you have seen both the pictures and read about them, what do you think about them? Can you also identify the similarities or are you contradicting the resemblances?