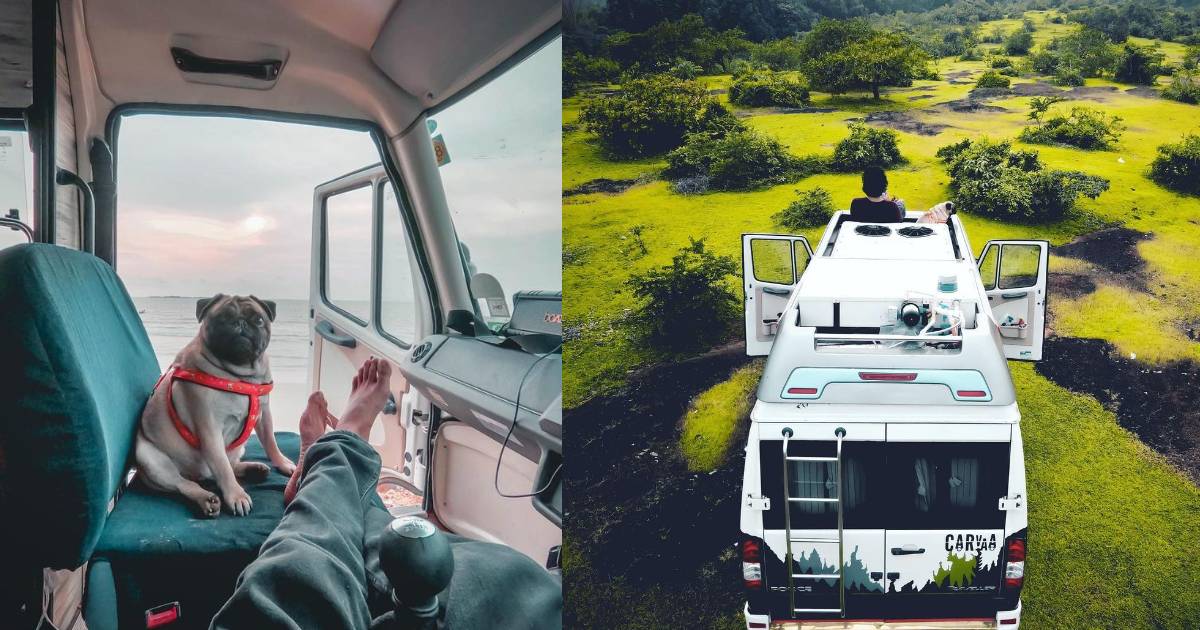 Furry and loyal, our pets are our families. So when we go on adventures far and near, we would not one to leave our four-legged friends behind. If you have always needed a little more convincing to take your doggo on a vacation, this 29-year-old boy from Gurgaon will convince you to. Amit Singh rented out a caravan and took his dog, Poppu on a road trip for 28 days. He travelled far South in Karnataka and fell asleep to the lapping sounds of waves as he parked his vehicle near the picturesque Mattu beach in Udupi.

Remember the movie Swades and more specifically the song ‘Yun hi chala chal raahi!‘. After watching that song we all wanted to go on a caravan trip and Amit made his dream of taking a caravan and going on a vacation without an itinerary come true.

On his first caravan trip with his dog Poppu, Amit drove through gorgeous landscapes and spent his nights stargazing with his pet. He visited 10 states and covered 8000kms in 28 days inside this van. The duo parked at highways, beaches, gas stations, and temples and slept against breathtaking backdrops. Sounds like a dream right?

The 29-year-old Amit Singh was a marketing professional until 2016 and quit it all to become a travel vlogger. In October 2020 when most of us were home arrested, Amit drove thousands of kilometers to get to the beaches of Karnataka. When the idea of getting onto a flight with a pet seemed challenging, Amit chose to rent out a caravan for a socially distanced trip amid the pandemic.

The Caravan Was Equipped With Bed, Kitchenette And Washroom

Amit rented the ‘home on wheels’ from Delhi-based start-up Carvaa India which was equipped with a fridge, kitchenette, washroom and shower, storage, and a comfortable sleeping space. The caravan cost him ₹6,000 per night. While some days it was highways and bridges, other days it was lakes and harbours. Many days he parked his caravan on a highway, pulled his camping chair out, and had breakfast under the open skies with Poppo.

Also read: I Stayed In An Igloo In The Himalayas With My Dogs &#038; Had The Best Trip In The Mountains

Amit drove from six to seven hours and day and took two separate routes on both sides. He chose the NH44 highway that took him through Madhya Pradesh, Maharashtra, Telangana, Karnataka, Tamil Nadu. On his way back, Amit drove through the Konkan route from Karnataka to Gokarna, Goa, Maharashtra, Gujarat, Rajasthan, and back to Haryana.  Here Are 10 Best Spots You Will Find On A Road Trip From Mumbai To Goa.

He Parked His Caravan In Highways And Picturesque Beaches

He made his first pit-stop in the picturesque town of Orchha, Madhya Pradesh, and then drove to Hyderabad. He also trekked to Nandi hills in Bengaluru and took a detour and drove towards Rameswaram Bridge in Tamil Nadu. But that’s the best part about a caravan trip, right? You can make impromptu plans and not worry about hotel bookings. He then reached his final destination, Mattu Beach in Udupi, and parked his caravan few metres from the shore and relished dosas, prawn curry, curd ride, and lemon rice from a beach-side stall during his time there.

It makes sense to travel with your pet in a caravan. You can go at your own pace; pack as many supplies as you need; and best of all, you get to stay with your pet throughout the trip.