India’s coveted cricketer Virat Kohli is not just known for his stellar batting skills and his captaincy, the former Indian skipper is known to have a heart of gold. Vivek Razdan, former Indian cricketer and well-known commentator revealed to Sportskeeda that Virat Kohli never travels business class. This is because he always gives up his business class seat to one of the bowlers of the team. In fact, he doesn’t even give up his business seat to his wife and actress Anushka Sharma. The couple travel in economy class, and Virat Kohli gives his business class seat to the bowlers of the team, as he believes that they should relax for three-four hours on the flight.

How often can you say that you ran into an A-list celebrity couple while you were sweating away during a trek? Well, not many get the privilege or surprise of that but a family in Bhutan managed to trump us all. Taking to Instagram, Anushka Sharma put up a heartfelt post sharing her and husband, Virat’s experience when they went on a trek to ring in his 31st birthday. 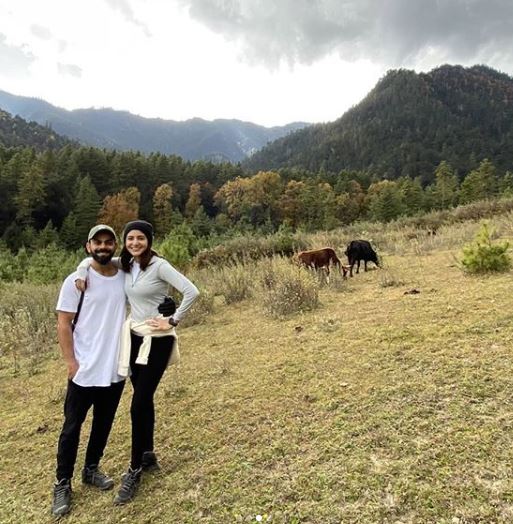 How Did Anushka And Virat Celebrate?

Travelling all the way to Bhutan, the couple decided to celebrate the Indian cricket team’s captain in a very unconventional manner. Instead of partying, they decided to take a trip to the beautiful country of Bhutan. Anyone who has been to Bhutan will tell you that it is all about hiking and walking around to explore the place. That is exactly what they did! Stopping at a tiny village on the way, they pet a baby goat who had been born just 4 months ago. The owner of the baby goat invited them inside for a cup of tea. Following which Anushka shared a heart-warming image of her and Virat mingling with the family and smiling away at the camera.

Today , during our 8.5 km uphill trek we stopped by a small village on a mountain to pet and feed a baby calf who was born just 4 months ago . While we did that the owner of the house asked us if we were tired and wanted to have a cup of tea ? So we went in to the home of this beautiful and warm family who had absolutely no idea who we were and yet they treated us with such warmth and love . We spent some time with them chatting and drinking tea and the whole time they just know us as two tired trekkers ! Whoever knows virat and me very closely, know that both of us live for such moments of genuine , simple & pure human connection . It fills us with such joy and peace knowing that they just wanted to be kind to two random foreigners ( plus our guide ) without seeking anything in return. If this is not the true meaning of life then i dont know what is . A memory we will cherish forever ??✨

Anushka said, “Whoever knows Virat and me very closely, know that both of us live for such moments of genuine, simple & pure human connection. It fills us with such joy and peace knowing that they just wanted to be kind to two random foreigners ( plus our guide ) without seeking anything in return.”

What a blessing to be able to visit such divine places with my soulmate. Also thank you everyone for your kind wishes from the bottom of my heart. ??❤️

She also went on to share images of them feeding the baby goat and expressing their gratitude to the family who went out of their way to make two foreigners feel welcome in their land. We can truly say that the post brought a huge smile on our faces.