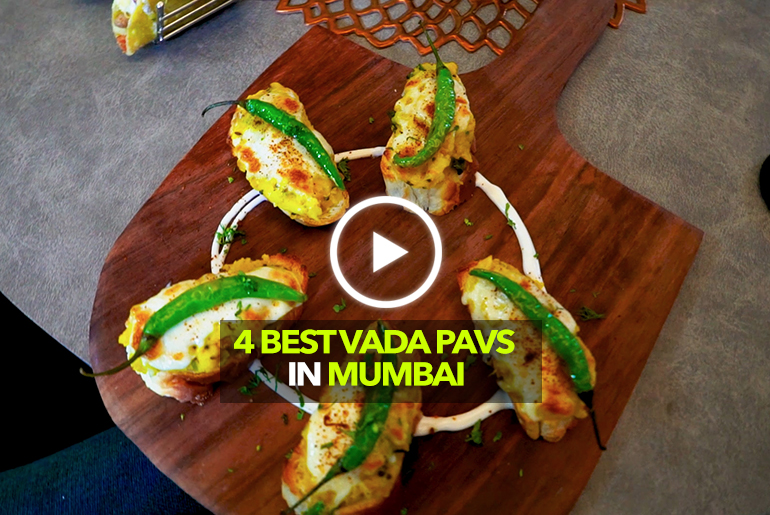 Fan of Vada Pavs? You can stop dreaming about your favourite street food, because we’ve got the best ones right here! From Vada Pav fondues, to cheese burst vada pavs, we’ve got them all!

‘At MRP’ in Oshiwara is pumping up our favorite staple food with spices and lots of gooey cheese in a fondue. The Vada Pav Fondue is made up with traditional vada and pav but served in a totally different style. Not only is the vada spiked with some spices and cheese to give it a new taste, but it is served with a fondue of gooey cheese that is a total hit with people.

Also read: Get Vada Pav Fondue Only At MRP Oshiwara

For all the vada pav and the chicken lovers, Pack-A-Pav has the perfect combination called ‘The Butter Chicken Pav’ for you.Pack-A-Pav, a tiny joint in the suburbs of Mumbai offers an impressive lot of non-veg and veg favorites; the standout being The Butter Chicken Pav. This yogurt-and-spice-marinated chicken,dressed in a velvety red bath comprising of butter, onions, ginger and tomatoes, scented with garam masala packed in a pav is priced at ₹130 and is a must try on the menu.

Also read: The Butter Chicken Pav At Pack-A-Pav Should Be On The ‘Must Have’ List A gem in the Vile Parle universe. We tried Anand’s Butter Vada Pav lathered with loads of butter and chutneys at ₹20. Another favorite would be the Grilled Cheese Schezwan Vada Pav that was tasteful with schezwan, cheese and grilled to perfection for ₹60.

Also read: Head To Anand Stall Near Mithibai College For An Ultimate Foodgasm! You must have got the story here by now. I mean! Isn’t the name enough? Farzi Cafe in Kamala Mills serves The Hidden pav which is basically bread inside the vada.

Can we call it inverse Vada Pav?