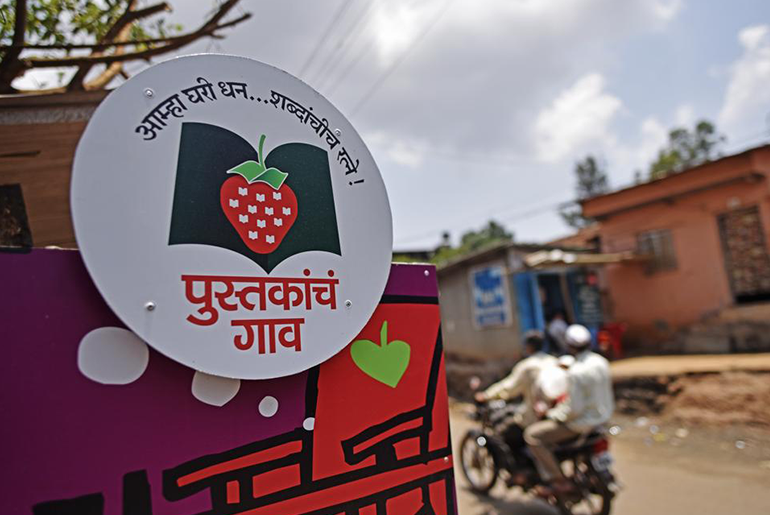 Hello, fellow bibliophiles. Go on a living book crawl in the village of Bhilar which is now also declared as ‘Pustakanche Gaanv’. Pssst: Gorge on strawberries while you’re at it!

Inspired by this Welsh town called Hay-on-Wye, Bhilar in Satara district of Maharashtra is declared as a ‘Pustakanche Gaanv’ (village of books). There are 25 locations across the hamlet that are converted into reader hotspots with free libraries and thousands of books to choose from.

Hay-on-Wye, Village of books in Britain

Nearly 25 premises including 3 temples, 2 schools, several lodges and homestays are spread on a stretch of 2 km in Bhilar. They have opened their gates for public reading on the 4th of May 2017.

About the stock, well, they have around 15,000 titles available of which around 2,000 are of children’s literature. Around 10,000 books provided by the state government are in Marathi. So, the state plans to add 15-20 per cent more books in Hindi and also in English. You pay a nominal fee to check out books since, the village needs funding to prevent damage to the books.

Bhilar has a population of about 10,000 and produces around 100 tonnes of strawberries every year. Here, 90% of the village’s population is involved in strawberry farming. So, fresh supply of strawberries in the season is an added advantage. The walls in the village are adorned with graffiti and wall paintings by artists. They volunteered by accepting the invitation from the Minister of Cultural Affairs and Marathi Language, Vinod Tawde. It was a three-day wall painting camp and covered 25 premises measuring around 11,000 square feet. The paintings and graphics on the wall indicate which genre of books are kept at a particular premise. Just that it makes it easier for readers to spot what they want. Bhilar lies between the picturesque hill stations of Panchgani and Mahabaleshwar in Maharashtra.

Meanwhile, this is a perfect getaway for book-lovers like you and me. Because, is there anything better some strawberries in your mouth while you binge on your favourite pieces of literature?