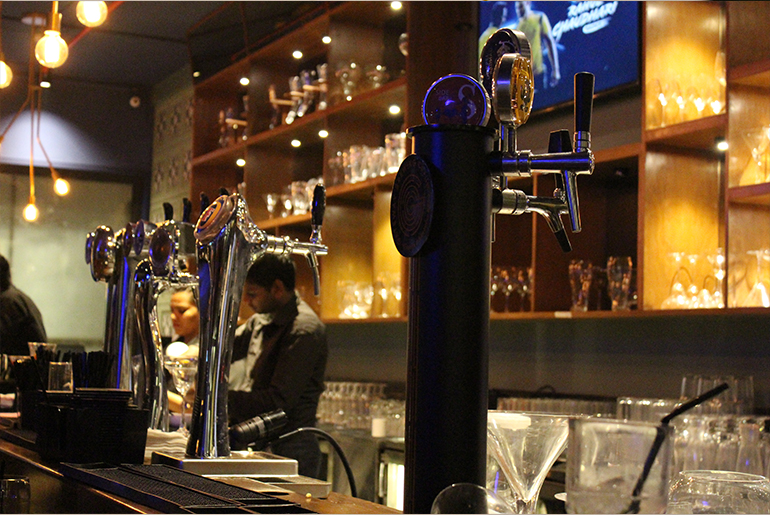 Hitchki, a hindi word for ‘hiccup’ is meant to evoke memories of a time gone by in a contemporary chic setting. This newly restaurant is sandwiched between Mirchi & Mime and Cafe Mangii.

Hitchki is yet another feather to the wing of restaurants lined up in Powai. With Hitchki written outside in bright, tall fonts and 90s pop-music reverberating outside, you are sure to stop by with curiosity about what this place must look from the inside. Hitchki has a very modern, aesthetic design feel attached to it. With an outdoor seating for around 30 people (which is closed due to the rains) this restaurant is quite spacious from the inside. The bar is the first thing to catch your attention and  a jovial lady bartender comes second.

A look around and you will be surprised where this huge space was hidden all this while. The interiors are groovy and the music is peppy. The tracks from the 90s played here are sure give you ‘hitchki‘ for the old times!  You may want to get up and groove to the music played by the DJ. The space is divided into sections for small and large groups.

Most of the main course dishes come with an accompaniment of naan and we’d have enjoyed a little more variety. That being said, the food was quite nice. The Dim Some were quite delicious followed by some main course Indi Chini Bhai Bhai (which was just some naan with some super spicy chicken manchurian) and Savji Mutton was a decent main course. Maharaja Tukda was Shahi Tukda infused with saffron and Baratiyo ka swagat were the two desserts which were the highlight of our meal. Cocktail-ers and Mocktail-ers rejoice! This place has a number of options to chose from. Again, the names in the menu are hilarious and outshine the actual drink. My favourite one being ‘Rosemary Mar-low’ & ‘Bhatt Saab Ki Chai’.

Disappointed a bit by the service, we had ordered for a Bubbly LIT which wasn’t the best either. May be it was the launch night and the staff wasn’t completely prepared for the influx of the crowd.

Where: G5, Transocean Lake Boulevard Road, Hiranandani Business Park, Powai, Mumbai
When: 11 AM to 1 AM
How Much: ₹1,600 for two people (approx.)