In order to give a boost to ‘Keravan Kerala’, BharatBenz has introduced a brand new, first-of-a-kind customised caravan coach in the state that will offer a comfortable stay and a seamless ride. According to the Tourism Department,  Tourism Minister P A Mohamed Riyas and Transport Minister Antony Raju jointly inaugurated the vehicle in a city event. According to an Outlook India report, Riyas has stated, “Caravan Tourism is going to provide the much-needed energy to the relentless efforts of Kerala Tourism to explore the unexplored destinations. This initiative will set a new trend in experiential tourism in the state.” 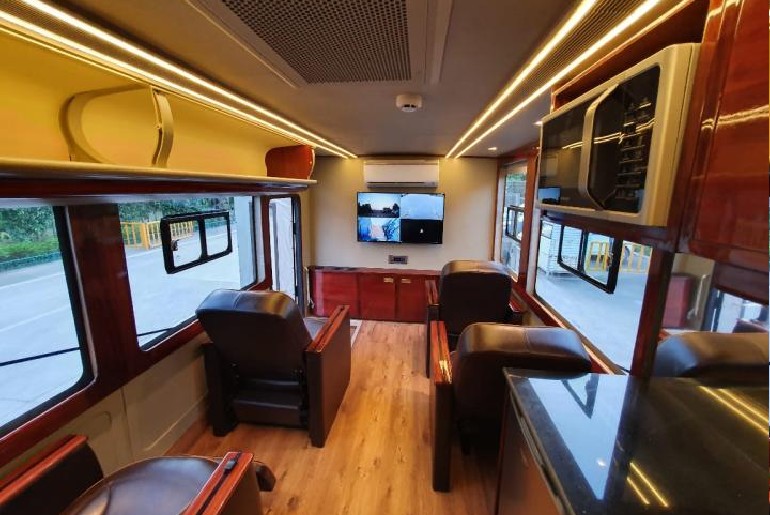 Also Read: Stay In This Desi-Style Caravan And Explore The Offbeat Destinations Of Meghalaya On Wheels

The swanky caravan launched by BharatBenz has a luxurious lounge equipped with recliner seats, a kitchen and a television. It has double bunk beds and a restroom with a cutting-edge shower fitting. For cooking purposes, the caravan has appliances like an induction cooktop, microwave and refrigerator. The caravan will be available in two configurations and can be customised to accommodate two to four travellers. 5 Budget-Friendly Caravans To Rent In India For A Safe Road Trip

Caravan Parks To Promote The Rich Heritage Of Kerala

Kerala’s Tourism Ministry is working on promoting caravan tourism in the state. The initiative will not only provide a thrilling experience to the tourists but will also assist in generating employment opportunities. Caravan parks will come up, which will also act as cultural hubs, allowing the locals to promote and sell their heritage products. Also, the caravans will have a special logo that will allow them to avoid extra on-road checks and pass freely through green channels.