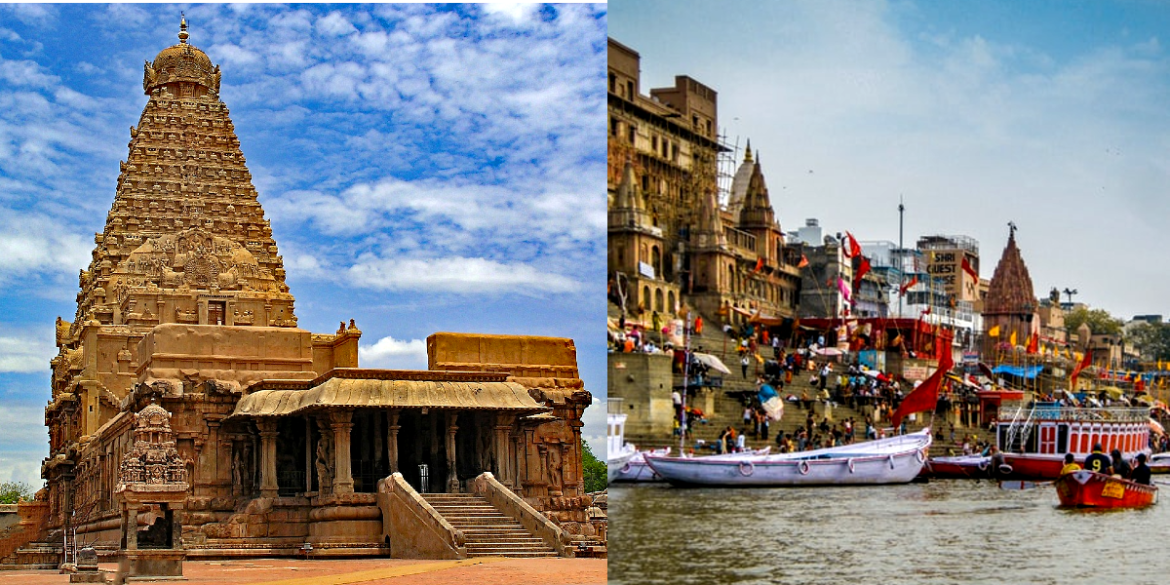 We often tend to admire technologically developed cities that house tall skyscrapers, swanky monuments and elaborate experiences. But there’s nothing quite as charming as cities that stood the test of time. Indian civilization is one of the oldest in the world, and our country houses cities that date back to 1200 BC. These ancient cities have weathered storms of history and witnessed the evolution of human civilisation. So, here are 6 of the oldest Indian cities that have intriguing history, mesmerising architecture and rich cultural heritage.

Formerly called “Tanjore”, Tamil Nadu’s Thanjavur is the royal city of the Nayaks and Cholas. Home to the Tanjore style painting, which indicate bronze castings, veena, mridangam and pith temple models, Thanjavur is a delight for history buffs. It’s best known for the UNESCO World Heritage site, e Great Living Chola Temples. It derieves its name from the demon Tanjanasura, who was believed to be killed by Sri Anandavalli Amman and Vishnu. The artistic grandeur and architectural marvel of the centuries-old temples here will take your breath away.

Nestled on the banks of Kshipra River, the ancient city of Ujjain is known to follow Puranic tradition. Part of present-day Madhya Pradesh, Ujjain find mention in renowned poet Kālidāsa’s work during this period. Ujjain has witnessed the rise and fall of several empires like the Mauryas, Nandas and Guptas. It’s one of the holiest cities in India that’s known for the popular Kumbh Mela. The ancient city houses Sufi saint Rumi’s tomb, Mahakaleshwar Jyotirlinga temple and intricate tie-and-dye fabrics of Bhairogarh.

Also Read: The Kal Bhairav Temple In Ujjain Has A Deity That Only Drinks Liquor

Varanasi is one of the oldest inhabitated cities in not just India, but the world. With age old buildings, ancient temples, sik fabrics and the mystical river front, this city is on every pilgrim’s bucket list. The legendary Benaras University, Buddhist shrine, Dhamekh Stupa, Vishwanath and Sankat Mochana Temples are some of the city’s innumerable treasures. Mark Twain had once said that Benaras is older than history, and he couldn’t have been more right. It continues to be a learning centre that was once the pinnacel of Aryan religion.

The epicentre of culture and trade for over 2500 years, Madurai finds mention in the literary works of the renowned traveller Megasthenes. Known for housing the world-famous Meenakshi Amman Temple, Madurai has been ruled by empires like the Cholas, Pandyas and the British. It’s believed taht Madurai has been built around 600 BC and rebuilt to its present form in the 17th century. Over the past hundred years, it has been an integral part of the lives of scholars and religious teachers of South India.

Earlier known as Pataliputra, Patna is home to some of the greatest minds of India like the mathematical genius, Aryabhata and the philosopher, economist and royal advisor to Chandragupta Maurya, Chanakya. This popular spot for pilgrims is nestled close to the ancient university, Nalanda. With its origins dating back to 2500 years, it’s the birthplace of the 10th guru of Sikhs, Guru Gobind Singh. The ancient Greek historian and traveller Megasthenes hailed Patna as the “greatest city on earth”. Its proximity to Bodhgaya and Nalanda attracts visitors from across the world.

While the actual existence of Pushkar remains a mystery, Hindu scriptures reveal that when Lord Brahma witnessed the demon Vajranabha harassing people, the Lord came down to earth to protect people. The place was named Pushkar where a flower from Brahma’s hand fell on the earth. Pushkar thus boasts of India’s only Brahma temple. This city in Rajasthan has been ruled by the Mughals and later by the Scindias. Today, it’s known for the annual Pushkar camel fair.

So desis, these were some of the oldest cities in India that are worth visiting thanks to the eons of history that it holds in its land. From ancient temples, breathtaking scenic beauty to rich culture and heritage there’s a lot to be explored.