Dubai-Based Resident Returns Home After…
Amristar Has A Tree Ambulance…
Not Snow But Toxic Foam…
Kerala, Maharashtra & Telangana Have… 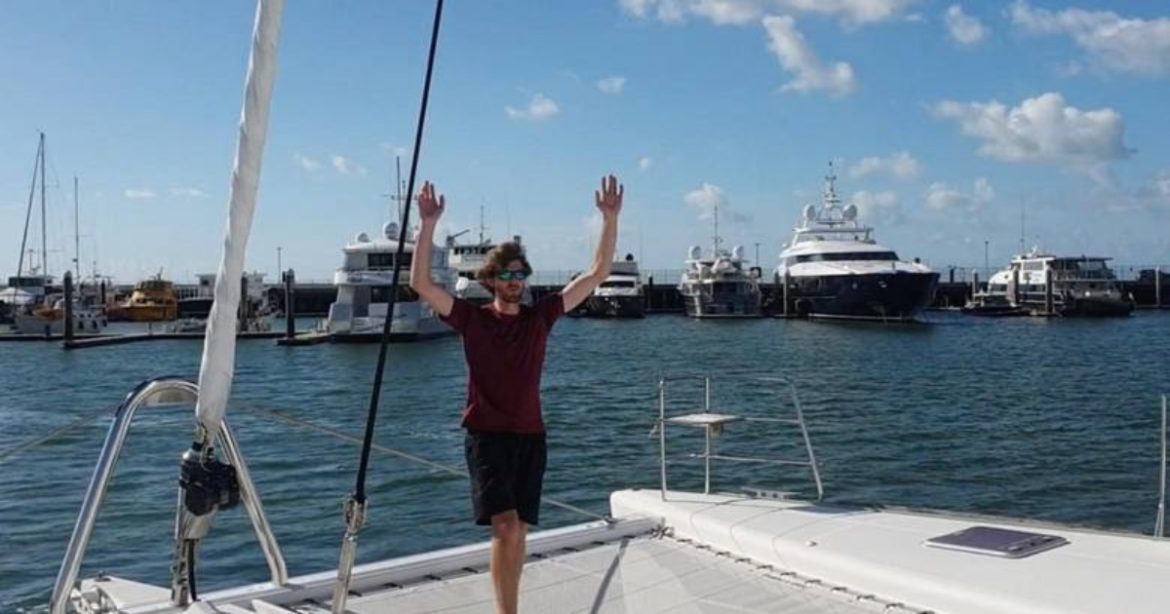 The Covid-19 pandemic has changed the way we live. Travel in particular has undergone a big change during these tough times. With mobility restrictions across the world, every country has its own set of quarantine rules for travelers. However, quarantine was way different one UAE resident. William Pardoe spent 197 days in quarantine — not in a facility or his flat, but onboard a catamaran. Wondering why? Here’s his story.

While borders across the world witnessed closures due to the pandemic, the scene was no different for those stuck on the waters. Border closures led to over 400,000 seafarers stranded in what was described by the International Maritime Organisation as a ‘deep crew change crisis’. Among them was William, a 29-year-old British national who spent a six-month quarantine on a 62 feet catamaran. He along with Captain Sam McCracken, First Mate Neil Antrum and his friend Petra Srubarova had set off from Port Douglas in Australia on April 26, 2020, towards Phuket.

While the world was slowly shutting down, William set out on a five-week boat trip with this group of seafarers heading towards Thailand. He thought this would keep him away from the virus and give the world enough time to get over the pandemic. As per the plan, the journey from Australia to Thailand would be 8,000km. The boat would then dock here for its repairs, before being sold off to its new owners in Greece.

The journey also brought with it a $200-per-week- stipend. Attracted by the offer, William and his friend Petra joined crewmen Sam and Neil on the journey. However, their dreams came crashing when Thailand closed borders for more than five weeks. The crew then made a week-long stop in Langkawi, Malaysia, before sailing over to the coastal town on May 30, 2020. Upon their arrival, Thai authorities refused to process their entry.

They couldn’t leave the country, as they weren’t allowed to enter in the first place. This is how their six-month-long quarantine began. After three months, on August 11, 2020 Thailand announced a ‘crew change’ policy, permitting the entry of seafarers. However, there was a challenge here as well. The crew had a catamaran and that wasn’t classified as a commercial vessel which essentially meant big tankers. The only hope now left for William and was for the pandemic to end so Will and the crew could fly home.

Spending 2 months on board a catamaran is no joke! But William and crew did that too. They had stocked up enough food for 2 months. After this, they had to rely on their weekly stipend to buy their supplies. Most of the meals were prepared on board the catamaran, with ingredients delivered by the local supermarkets. Being stuck in a catamaran, the crew resorted to creative ways to keep themselves busy. They spent time reading books, exercising, organising chores around the boat and also getting involved with some artwork.

“We kept saying that we will be free after two weeks and it is only a matter of time from here on. Weeks became months and we were stuck in the same situation,” William told Khaleej Times. However, it wasn’t long before William and crew got frustrated of the situation. They took the matter on their own hands and on November 1, 2020, they managed to join another boat that was setting sail from Phuket.

They then landed in Singapore, where they were given a one-day visa. William then managed to get on a flight to Istanbul and finally reach Dubai. After a long ordeal of 197 days, William finally returned to Dubai where his parents live on November 12, 2020.