Manipur To Get World’s Highest Railway Bridge Pier; To Be Taller Than Bridge In Europe

India is all set to get the world’s highest railway bridge pier in Manipur. Breaking the world record 139 metres of Mala-Rijeka viaduct at Europe’s Montenegro, this bridge will be towering at the height of 141 metres. The bridge will connect Manipur to the rest of India as part of the new broad gauge line. Read on to know why this is one of the most awaited projects of the Indian Railways.

This ambitious project in Manipur is a vital part of the 111km long Jiribam-Imphal railway line. It will connect the capital of Manipur, Imphal, with the broad gauge network of India. Built at a pier height of 141m, it will be the world’s highest railway bridge. Sandeep Sharma, Chief Engineer of this project revealed to ANI that after the completion of the bridge, a massive distance of 111km can be covered in just 2-2.5 hours. Currently, it takes 10-12 hours to travel between Jiribam-Imphal (NH-37) as the two cities are 220 km apart. In Sandeep Sharma’s words, this upcoming bridge crossing Noney Valley will be the highest pier bridge in the world. 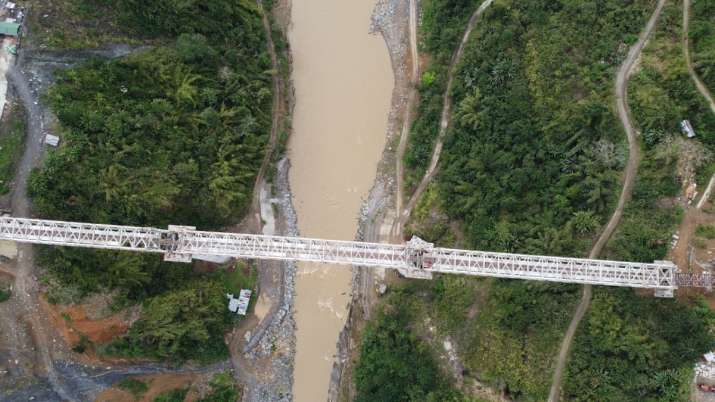 Bridge To Have North East’s Longest Railway Tunnel At 10.280 Km

According to News18, this Manipur bridge will be 703 metres in total length. An official revealed to News18 that self-erecting lifts will be used at each pier for safety. Hydraulic augers will be used for its construction. To construct the tall piers, a specially designed ‘slip form’ technique is used. This project has a total of 45 tunnels. Tunnel No. 12 will be the longest railway tunnel in the North East at 10.280 km. Travel enthusiasts can expect the bridge to be completed by 2023.

The word 'impossible' is not in Indian Railways' dictionary!

Indian Railways is constructing the world’s tallest pier bridge across river Ijai in Manipur, in its effort to transform the Northeast through seamless rail connectivity. pic.twitter.com/xohUzZFfk8