Mussoorie, Nainital, Shimla & Manali…
You Can Now Buy A…
Floodgates To Come Up At…
The Tree House Resort In…

Mussoorie, Nainital, Shimla & Manali Get Over Crowded As People Seek Respite From Heat 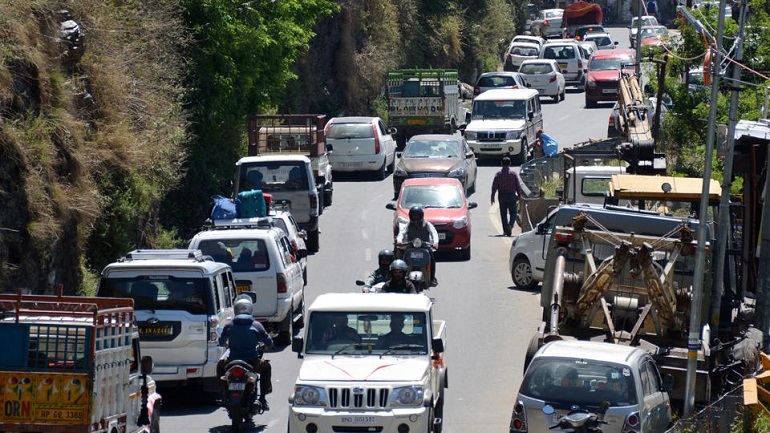 While the temperature in Delhi is expected to cross the 45 degrees march, IMD has stated that there is not going to be any respite from the heat in North India. The heat wave in north India is worsening day by day with the maximum temperature recorded at 48 degrees. To add to the plight, people from the plains are heading over to the hill stations in such large numbers that hills are overcrowded and facing traffic jams and overbookings.

With the heat wave intensifying, hill stations like Mussoorie, Nainital, Shimla, and Manali, are witnessing a huge influx of tourists. And it’s not just the popular hill stations. Smaller places like Kanatal in Uttarakhand and Kasol in Uttarakhand are also facing overcrowding, traffic congestion, and overbooking.

Reportedly, the Nainital administration has taken a decision to restrict the tourists from entering the hill station each time there is no parking space and will only let them in once the traffic has cleared out.

Over the weekend tourists witnessed traffic jams in Mussourie, Haridwar, Nainital and Rishikesh. On Saturday many travelers in Mussourie and Nainital had to take shelters on pavements and bus stands as the hotels were all completely fully booked.

Also Read: The Aloha On The Ganges Invites You To A Stay Of Tranquility Amidst The Scenic Beauty Of Rishikesh

Others who were trying to make their way back to Delhi were stuck in a jam in Haridwar for about five hours straight, and the ongoing construction on the highway just made things worse.

Kedarnath is also extremely crowded once again with approximately 10,000 vehicles approaching every day.

Nothing much can be said about how long it shall take until the temperature drops. Although the weathermen do predict slight rainfall on 12th and 13th June after which a drop of 2 degrees will be expected. But seeing the larger picture it won’t really make much difference to the people suffering in North India.

Goa To Get Sand Dune Parks In Morjim...